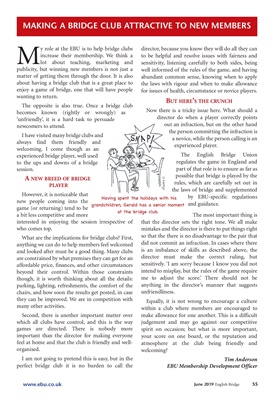 y role at the EBU is to help bridge clubs

increase their membership. We think a

lot about teaching, marketing and

publicity, but winning new members is not just a

matter of getting them through the door. It is also

about having a bridge club that is a great place to

enjoy a game of bridge, one that will have people

The opposite is also true. Once a bridge club

becomes known (rightly or wrongly) as

'unfriendly', it is a hard task to persuade

I have visited many bridge clubs and

always find them friendly and

welcoming. I come though as an

to the ups and downs of a bridge

A NEW BREED OF BRIDGE

However, it is noticeable that

new people coming into the

game (or returning) tend to be

a bit less competitive and more

What are the implications for bridge clubs? First,

anything we can do to help members feel welcomed

and looked after must be a good thing. Many clubs

are constrained by what premises they can get for an

affordable price, finances, and other circumstances

beyond their control. Within those constraints

though, it is worth thinking about all the details:

parking, lighting, refreshments, the comfort of the

chairs, and how soon the results get posted, in case

they can be improved. We are in competition with

Second, there is another important matter over

which all clubs have control, and this is the way

games are directed. There is nobody more

important than the director for making everyone

feel at home and that the club is friendly and well-

I am not going to pretend this is easy, but in the

perfect bridge club it is no burden to call the

director, because you know they will do all they can

to be helpful and resolve issues with fairness and

sensitivity, listening carefully to both sides, being

well informed of the rules of the game, and having

the laws with rigour and when to make allowance

for issues of health, circumstance or novice players.

BUT HERE'S THE CRUNCH

Now there is a tricky issue here. What should a

director do when a player correctly points

out an infraction, but on the other hand

the person committing the infraction is

a novice, while the person calling is an

regulates the game in England and

part of that role is to ensure as far as

possible that bridge is played by the

rules, which are carefully set out in

the laws of bridge and supplemented

The most important thing is

that the director sets the right tone. We all make

mistakes and the director is there to put things right

so that the there is no disadvantage to the pair that

did not commit an infraction. In cases where there

is an imbalance of skills as described above, the

director must make the correct ruling, but

sensitively. 'I am sorry because I know you did not

intend to misplay, but the rules of the game require

me to adjust the score.' There should not be

anything in the director's manner that suggests

Equally, it is not wrong to encourage a culture

within a club where members are encouraged to

make allowance for one another. This is a difficult

judgement and may go against our competitive

spirit on occasion; but what is more important,

your score on one board, or the reputation and

atmosphere at the club being friendly and

Having spent the holidays with his

grandchildren, Gerald has a senior moment

at the bridge club.