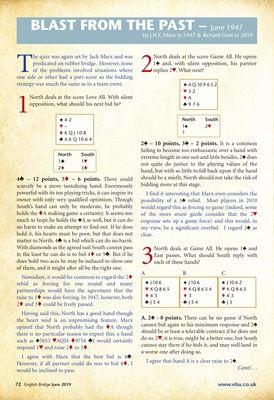 North deals at the score Love All. With silent

opposition, what should his next bid be? 2

North deals at the score Game All. He opens

1´ and, with silent opposition, his partner

North deals at Game All. He opens 1´ and

East passes. What should South reply with

each of these hands?

powerful with its ten playing tricks, it can inspire its

owner with only very qualified optimism. Though

South's hand can only be moderate, he probably

holds the tA making game a certainty. It seems too

much to hope he holds the ´A as well, but it can do

no harm to make an attempt to find out. If he does

hold it, his hearts must be poor, but that does not

matter to North. 4® is a bid which can do no harm.

With diamonds as the agreed suit South cannot pass

does hold two aces he may be induced to show one

of them, and it might after all be the right one.

Nowadays, it would be common to regard the 2t

rebid as forcing for one round and many

partnerships would have the agreement that the

2t and 3t could be freely passed.

Having said this, North has a good hand though

the heart void is an unpromising feature. Marx

opined that North probably had the tA though

there is no particular reason to expect this: a hand

I agree with Marx that the best bid is 4®.

However, if all partner could do was to bid 4t, I

would be inclined to pass.

he quiz was again set by Jack Marx and was

predicated on rubber bridge. However, none

of the problems involved situations where

one side or other had a part-score so the bidding

strategy was much the same as in a team event.

failing to become too enthusiastic over a hand with

extreme length in one suit and little besides. 2´ does

not quite do justice to the playing values of the

hand, but with so little to fall back upon if the hand

should be a misfit, North should not take the risk of

bidding more at this stage.

I find it interesting that Marx even considers the

would regard this as forcing to game (indeed, some

of the more avant garde consider that the 2™

response sets up a game force) and this would, in

my view, be a significant overbid. I regard 2´ as

cannot bid again to his minimum response and 2´

should be at least a tolerable contract if he does not

cannot stay there if he bids it, and may well land in

a worse one after doing so.