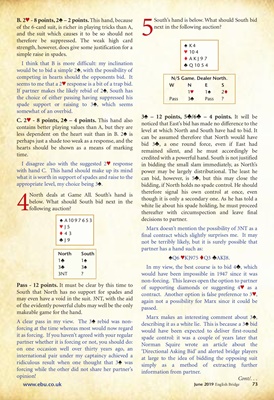 North deals at Game All. South's hand is

below. What should South bid next in the

South's hand is below. What should South bid

next in the following auction?

of the 6-card suit, is richer in playing tricks than A,

and the suit which causes it to be so should not

strength, however, does give some justification for a

I think that B is more difficult: my inclination

would be to bid a simple 2´, with the possibility of

competing in hearts should the opponents bid. It

seems to me that a 2™ response is a bit of a trap bid.

If partner makes the likely rebid of 2´, South has

the choice of either passing having suppressed his

spade support or raising to 3´, which seems

somewhat of an overbid.

contains better playing values than A, but they are

less dependent on the heart suit than in B. 2´ is

perhaps just a shade too weak as a response, and the

hearts should be shown as a means of marking

I disagree also with the suggested 2™ response

with hand C. This hand should make up its mind

appropriate level, my choice being 3´.

Pass - 12 points. It must be clear by this time to

South that North has no support for spades and

may even have a void in the suit. 3NT, with the aid

of the evidently powerful clubs may well be the only

makeable game for the hand.

A clear pass in my view. The 3´ rebid was nonforcing

at the time whereas most would now regard

it as forcing. If you haven't agreed with your regular

partner whether it is forcing or not, you should do:

on one occasion well over thirty years ago, an

international pair under my captaincy achieved a

ridiculous result when one thought that 3´ was

forcing while the other did not share her partner's

noticed that East's bid has made no difference to the

level at which North and South have had to bid. It

can be assumed therefore that North would have

remained silent, and he must accordingly be

credited with a powerful hand. South is not justified

in bidding the small slam immediately, as North's

power may be largely distributional. The least he

can bid, however, is 5®, but this may close the

bidding, if North holds no spade control. He should

therefore signal his own control at once, even

though it is only a secondary one. As he has told a

white lie about his spade holding, he must proceed

thereafter with circumspection and leave final

Marx doesn't mention the possibility of 3NT as a

final contract which slightly surprises me. It may

not be terribly likely, but it is surely possible that

partner has a hand such as:

In my view, the best course is to bid 4®, which

would have been impossible in 1947 since it was

non-forcing. This leaves open the option to partner

of supporting diamonds or suggesting 4™ as a

contract. Another option is false preference to 3™,

again not a possibility for Marx since it could be

describing it as a white lie. This is because a 3´ bid

would have been expected to deliver first-round

spade control: it was a couple of years later that

Norman Squire wrote an article about the

at large to the idea of bidding the opposing suit

simply as a method of extracting further