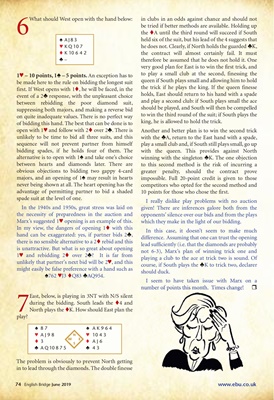 What should West open with the hand below:

be made here to the rule on bidding the longest suit

first. If West opens with 1t, he will be faced, in the

event of a 2® response, with the unpleasant choice

between rebidding the poor diamond suit,

suppressing both majors, and making a reverse bid

on quite inadequate values. There is no perfect way

of bidding this hand. The best that can be done is to

unlikely to be time to bid all three suits, and this

sequence will not prevent partner from himself

bidding spades, if he holds four of them. The

alternative is to open with 1´ and take one's choice

between hearts and diamonds later. There are

majors, and an opening of 1´ may result in hearts

never being shown at all. The heart opening has the

advantage of permitting partner to bid a shaded

spade suit at the level of one.

the necessity of preparedness in the auction and

Marx's suggested 1™ opening is an example of this.

In my view, the dangers of opening 1t with this

hand can be exaggerated: yes, if partner bids 2®,

there is no sensible alternative to a 2t rebid and this

is unattractive. But what is so great about opening

unlikely that partner's next bid will be 2™, and this

might easily be false preference with a hand such as

East, below, is playing in 3NT with N/S silent

during the bidding. South leads the t4 and

North plays the tK. How should East plan the

The problem is obviously to prevent North getting

in to lead through the diamonds. The double finesse

in clubs in an odds against chance and should not

be tried if better methods are available. Holding up

the tA until the third round will succeed if South

held six of the suit, but his lead of the 4 suggests that

he does not. Clearly, if North holds the guarded ®K,

the contract will almost certainly fail. It must

therefore be assumed that he does not hold it. One

very good plan for East is to win the first trick, and

to play a small club at the second, finessing the

queen if South plays small and allowing him to hold

the trick if he plays the king. If the queen finesse

holds, East should return to his hand with a spade

and play a second club: if South plays small the ace

should be played, and South will then be compelled

to win the third round of the suit; if South plays the

king, he is allowed to hold the trick.

Another and better plan is to win the second trick

with the ®A, return to the East hand with a spade,

play a small club and, if South still plays small, go up

with the queen. This provides against North

winning with the singleton ®K. The one objection

to this second method is the risk of incurring a

greater penalty, should the contract prove

impossible. Full 20-point credit is given to those

competitors who opted for the second method and

10 points for those who chose the first.

I really dislike play problems with no auction

given! There are inferences galore both from the

opponents' silence over our bids and from the plays

which they make in the light of our bidding.

In this case, it doesn't seem to make much

difference. Assuming that one can trust the opening

lead sufficiently (i.e. that the diamonds are probably

playing a club to the ace at trick two is sound. Of

course, if South plays the ®K to trick two, declarer

I seem to have taken issue with Marx on a