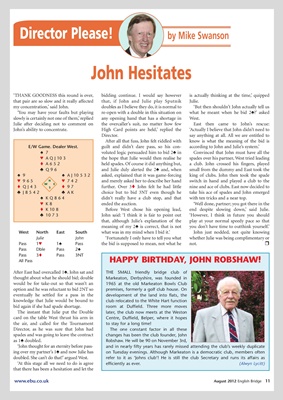 ‘THANK GOODNESS this round is over, bidding continue. I would say however is actually thinking at the time,’ quipped

that pair are so slow and it really affected that, if John and Julie play Sputnik Julie.

my concentration,’ said John. doubles as I believe they do, it is normal to ‘But then shouldn’t John actually tell us

‘You may have your faults but playing re-open with a double in this situation on what he meant when he bid 2´?’ asked

slowly is certainly not one of them,’ replied any opening hand that has a shortage in West.

Julie after deciding not to comment on the overcaller’s suit, no matter how few East then came to John’s rescue:

John’s ability to concentrate. High Card points are held,’ replied the ‘Actually I believe that John didn’t need to

Director. say anything at all. All we are entitled to

After all that fuss, John felt riddled with know is what the meaning of the bid is

E/W Game. Dealer West. guilt and didn’t dare pass, so his con- according to John and Julie’s system.’

™ A Q J 10 3 the hope that Julie would then realise he spades over his partner, West tried leading

t A652 held spades. Of course it did anything but, a club. John crossed his fingers, played

® Q96 and Julie duly alerted the 2´ and, when small from the dummy and East took the

´ KQ864 didn’t really have a club stop, and that with ten tricks and a near top.

™ K8 ended the auction. ‘Well done, partner; you got there in the

that, although Julie’s explanation of the play at your normal speedy pace so that

meaning of my 2´ is correct, that is not you don’t have time to outthink yourself.’

West North East South what was in my mind when I bid it.’ John just nodded, not quite knowing

After East had overcalled 1´, John sat and THE SMALL friendly bridge club of

thought about what he should bid; double Markeaton, Derbyshire, was founded in

option and he was reluctant to bid 2NT so premises, formerly a golf club house. On

eventually he settled for a pass in the development of the land into flats, the

bid again if she had spade shortage. room at Duffield. Three more moves

The instant that Julie put the Double later, the club now meets at the Weston

card on the table West thrust his arm in Centre, Duffield, Belper, where it hopes

the air, and called for the Tournament to stay for a long time!

Director, as he was sure that John had The one constant factor in all these

spades and was going to leave the contract changes has been the club founder, John

ing over my partner’s 1´ and now Julie has on Tuesday evenings. Although Markeaton is a democratic club, members often

doubled. She can’t do that!’ argued West. refer to it as ‘Johns club’! He is still the club Secretary and runs its affairs as

‘At this stage all we need to do is agree efficiently as ever. (Alwyn Lycitt)

that there has been a hesitation and let the