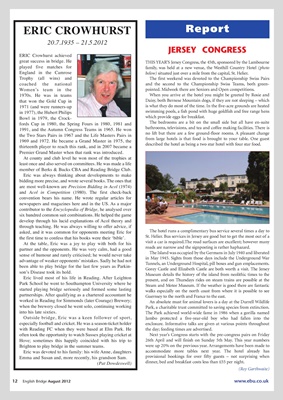 great success in bridge. He THIS YEAR’S Jersey Congress, the 45th, sponsored by the Lambourne

played five matches for family, was held at a new venue, the Westhill Country Hotel (photo

England in the camrose below) situated just over a mile from the capital, St. Helier.

coached the national and the second to the Championship Swiss Teams, both green-

Women’s team in the pointed. Midweek there are Seniors and Open competitions.

1970s. He was in teams When you arrive at the hotel you might be greeted by Rosie and

that won the Gold cup in Daisy, both Bernese Mountain dogs, if they are not sleeping – which

1971 (and were runners-up is what they do most of the time. In the five-acre grounds are heated

in 1977), the Hubert Philips swimming pools, a fish pond with huge goldfish and free range hens

Bowl in 1979, the crock- which provide eggs for breakfast.

1991, and the Autumn congress Teams in 1965. He won bathrooms, televisions, and tea and coffee making facilities. There is

the Two Stars Pairs in 1967 and the Life Masters Pairs in no lift but there are a few ground-floor rooms. A pleasant change

from large hotels is that food is brought to your table. One guest

described the hotel as being a two star hotel with four star food.

thirteenth player to reach this rank, and in 2007 became a

Premier Grand Master when that rank was introduced.

least once and also served on committees. He was made a life

Eric was always thinking about developments to make

bidding more precise, and wrote several books. The ones that

are most well-known are Precision Bidding in Acol (1974)

and Acol in Competition (1980). The first check-back

convention bears his name. He wrote regular articles for

newspapers and magazines here and in the US. As a major

contributor to the Encyclopedia of Bridge, he analysed over

develop through his lucid explanations of Acol theory and

through teaching. He was always willing to offer advice, if

asked, and it was common for opponents meeting Eric for The hotel runs a complimentary bus service several times a day to

the first time to confess that his books were their ‘bible’. St. Helier. Bus services in Jersey are good but to get the most out of a

At the table, Eric was a joy to play with both for his visit a car is required.The road surfaces are excellent; however many

partner and the opponents. He was very calm, had a good roads are narrow and the signposting is rather haphazard.

sense of humour and rarely criticised; he would never take

in May 1945. Sights from those days include the Underground War

advantage of weaker opponents’ mistakes. Sadly he had not

Gorey Castle and Elizabeth Castle are both worth a visit. The Jersey

son’s Disease took its hold. Museum details the history of the island from neolithic times to the

Eric lived most of his life in reading. After Leighton present, and on Thursdays rides on steam trains are possible at the

Park School he went to Southampton University where he Steam and Motor Museum. If the weather is good there are fantastic

partnerships. After qualifying as a chartered accountant he Guernsey to the north and France to the east.

worked in reading for Simmonds (later courage) Brewery; An absolute must for animal lovers is a day at the Durrell Wildlife

when the brewery closed he went solo, continuing working Park, a charitable trust committed to saving species from extinction.

into his late sixties. The Park achieved world-wide fame in 1986 when a gorilla named

Outside bridge, Eric was a keen follower of sport, Jambo protected a five-year-old boy who had fallen into the

especially football and cricket. He was a season-ticket holder enclosure. Informative talks are given at various points throughout

with reading Fc when they were based at Elm Park. He the day; feeding times are advertised.

Hove; sometimes this happily coincided with his trip to 26th April and will finish on Sunday 5th May. This year numbers

Brighton to play bridge in the summer teams. were up 20% on the previous year. Arrangements have been made to

Eric was devoted to his family: his wife Anne, daughters accommodate more tables next year. The hotel already has

Emma and Susan and, more recently, his grandson Sam. provisional bookings for over fifty guests – not surprising when