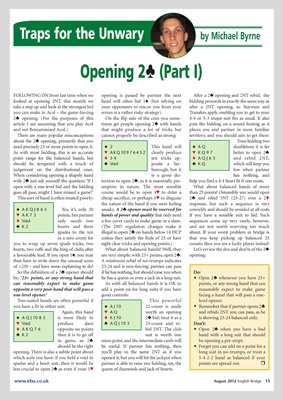 FOLLOWING ON from last time when we opening is passed by partner the next After a 2® opening and 2NT rebid, the

looked at opening 2NT, this month we hand will often bid 1´ (but relying on bidding proceeds in exactly the same way as

take a step up and look at the strongest bid your opponents to rescue you from your after a 2NT opening, so Stayman and

you can make in Acol – the game-forcing errors is a rather risky strategy). Transfers apply, enabling you to get to your

and not Benjaminised Acol.) that might produce a lot of tricks but places you and partner in more familiar

There are many popular misconceptions cannot properly be described as strong: territory, and you should aim to get there:

about the 2® opening, primarily that you Even holding two

need precisely 23 or more points to open it. ´ 2 This hand will ´ AQ doubletons it is far

judgement on the distributional ones. borough, but it low when partner

When considering opening a shapely hand is a gross dis- has nothing, and

with 2® just ask yourself the question: ‘If I tortion to open 2®, as it is essentially pre- help you find a 4-4 heart fit if one exists.

open with a one-level bid and the bidding emptive in nature. The most sensible What about balanced hands of more

goes all pass, might I have missed a game?’ course would be to open 4™ to deter a than 25 points? Ostensibly you would open

the nature of the hand if you were feeling response, but such a sequence is very

´ AKQJ865 Yes, it’s only 20 sneaky. A 2® opener must be reserved for unwieldy and should be avoided at all costs

™ AK73 points, but partner hands of power and quality that only need if you have a sensible suit to bid. Such

t Void only needs two a few cover cards to make game or a slam. sequences come up very rarely, however,

spades to the ten illegal to open 2® on hands below 16 HCP about. If your worst problem in bridge is

you to wrap up seven spade tricks, two eight clear tricks and opening points.) counts, then you are a lucky player indeed!

hearts, two ruffs and the king of clubs after What about balanced hands? Well, they Let’s review the dos and don’ts of the 2®

So the definition of a 2® opener should if he has nothing, but should raise you when Do:

can reasonably expect to make game As with all balanced hands it is OK to points, or any strong hand that can

one-level opener.’ good controls: facing a hand that will pass a one-

Two-suited hands are often powerful if This powerful level opener.

Again, this hand ™ AQ worth an opening and rebids 2NT you can pass, as he

in game, so 2® more point, and the intermediate cards will be opening a pre-empt.

should be the right be useful. If partner has nothing, then • Forget you can add on a point for a

opening. There is also a subtle point about you’ll play in the same 2NT as if you long suit in no-trumps, or treat a

which suits you have: if you held a void in opened it, but you will hit the jackpot when 5-4-2-2 hand as balanced if your

spades and a heart suit, then it would be partner is able to raise you holding, say, the points are spread out. r

less crucial to open 2® as even if your 1™ queen of diamonds and jack of hearts.