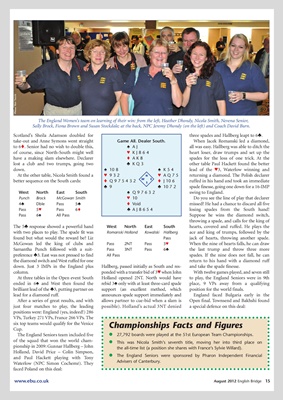 The England Women’s team on learning of their win: from the left, Heather Dhondy, Nicola Smith, Nevena Senior,

Sally Brock, Fiona Brown and Susan Stockdale; at the back, NPC Jeremy Dhondy (on the left) and Coach David Burn.

to 6t. Senior had no wish to double this, ´ AJ all was easy. Hallberg was able to ditch the

of course, since North-South might well ™ KJ864 heart loser, draw trumps and set up the

have a making slam elsewhere. Declarer t AK8 spades for the loss of one trick. At the

At the other table, Nicola Smith found a ™ 932 N ™ AQ75 returning a diamond. The Polish declarer

4® Dble Pass 5® t Void missed? He had a chance to discard all five

Pass 6´ All Pass Suppose he wins the diamond switch,

throwing a spade, and calls for the king of

with two places to play. The spade fit was Romanski Holland Kowalski Hallberg ace and king of trumps, followed by the

found but what would the reward be? Liz Pass jack of hearts, throwing another spade.

McGowan led the king of clubs and Pass 2NT Pass 3™ When the nine of hearts falls, he can draw

preference ®3. East was not pressed to find All Pass spades. If the nine does not fall, he can

down. Just 3 IMPs in the England plus Hallberg, passed initially as South and res- and take the spade finesse.

column. ponded with a transfer bid of 3™ when John With twelve games played, and seven still

At three tables in the Open event South Holland opened 2NT. North would have to play, the England Seniors were in 9th

ended in 6´ and West then found the rebid 3´ only with at least three-card spade place, 9 VPs away from a qualifying

brilliant lead of the ®3, putting partner on support (an excellent method, which position for the world finals.

lead for a diamond ruff. announces spade support immediately and England faced Bulgaria early in the

After a series of great results, and with allows partner to cue-bid when a slam is Open final. Townsend and Bakhshi found

six top teams would qualify for the Venice

of the squad that won the world cham-

• This was Nicola Smith’s seventh title, moving her into third place on

the all-time list (a position she shares with France’s Sylvie Willard).

faced Poland on this deal: