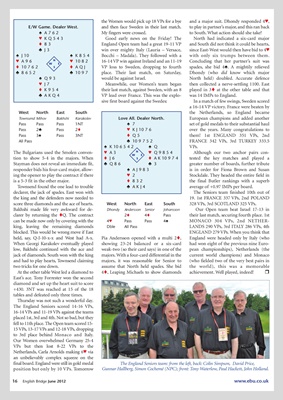 the Women would pick up 18 VPs for a bye and a major suit. Dhondy responded 4™,

E/W Game. Dealer West. and then face Sweden in their last match. to play in partner’s major, and this ran back

´ A762 My fingers were crossed. to South. What action should she take?

™ KQ543 Good early news on the Friday! The North had indicated a six-card major

t 83 England Open team had a great 19-11 VP and South did not think it could be hearts,

® J3 win over mighty Italy (Lauria – Versace, since East-West would then have bid to 4™

´ Q93 would be against Israel. North held) doubled. Accurate defence

t K954 their last match, against Sweden, with an 8 played in 3t at the other table and that

® AKQ4 VP lead over France. This was the explo- was 14 IMPs to England.

sive first board against the Swedes: In a match of few swings, Sweden scored

The Bulgarians used the Smolen conven- ™ A3 W

responder bids his four-card major, allow- ´ AJ983 is in order for Fiona Brown and Susan

ing the opener to play the contract if there ™ 2 Stockdale. They headed the entire field in

is a 5-3 fit in the other major. t 832 the final Butler rankings with a superb

Townsend found the one lead to trouble ® AKJ4 average of +0.97 IMPs per board.

declarer, the jack of spades. East won with The Seniors team finished 10th out of

blocked. This would be wrong move if East ENGLAND 279 VPs. When you think that

held, say, Q-J-10-x-x and West had A-x. Pia Andersson opened with a multi 2t, England were headed only by Italy (who

low, Bakhshi continued with the ace and weak-two (so their card says) in one of the pean championships), Netherlands (the

jack of diamonds. South won with the king majors. With a four-card differential in the current world champions) and Monaco

and had to play hearts, Townsend claiming majors, it was reasonable for Senior to (who fielded two of the very best pairs in

two tricks for one down. assume that North held spades. She bid the world), this was a memorable

At the other table West led a diamond to 4t, Leaping Michaels to show diamonds achievement. Well played, indeed! r

diamond and set up the heart suit to score

tables and defeated only three times.

Thursday was not such a wonderful day.

to 3rd place behind Monaco and Italy.

an unbelievably complex squeeze on the

final board. England were still in gold medal The England Seniors team: from the left, back: Colin Simpson, David Price,