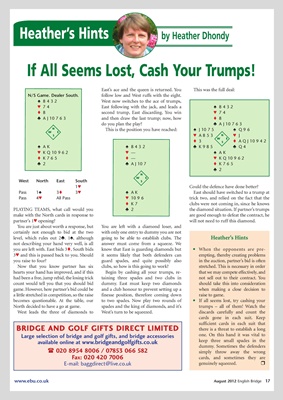 If All Seems Lost, Cash Your Trumps!

East’s ace and the queen is returned. You This was the full deal:

1™ Could the defence have done better?

t K7 clubs were not coming in, since he knows

PLAYING TEAMS, what call would you ® 2 the diamond situation. If partner’s trumps

make with the North cards in response to are good enough to defeat the contract, he

partner’s 1™ opening? will not need to ruff this diamond.

You are just about worth a response, but You are left with a diamond loser, and

level, which rules out 2®. 1´, although going to be able to establish clubs. The Heather’s Hints

not describing your hand very well, is all answer must come from a squeeze. We

you are left with. East bids 3t, South bids know that East is guarding diamonds but • When the opponents are pre-

3™ and this is passed back to you. Should it seems likely that both defenders can empting, thereby creating problems

you raise to four? guard spades, and quite possibly also in the auction, partner’s bid is often

Now that you know partner has six clubs, so how is this going to work? stretched. This is necessary in order

hearts your hand has improved, and if this Begin by cashing all your trumps, re- that we may compete effectively, and

had been a free, jump rebid, the losing trick taining three spades and two clubs in not sell out to their contract. You

count would tell you that you should bid dummy. East must keep two diamonds should take this into consideration

game. However, here partner’s bid could be and a club honour to prevent setting up a when making a close decision to

a little stretched in competition, so the raise finesse position, therefore coming down raise to game.

becomes questionable. At the table, our to two spades. Now play two rounds of • If all seems lost, try cashing your

North decided to have a go at game. spades and the king of diamonds, and it’s trumps – all of them! Watch the

West leads the three of diamonds to West’s turn to be squeezed. discards carefully and count the

cards gone in each suit. Keep

sufficient cards in each suit that

Large selection of bridge and golf gifts, and bridge accessories one. On this hand it was vital to

available online at www.bridgeandgolfgifts.co.uk keep three small spades in the