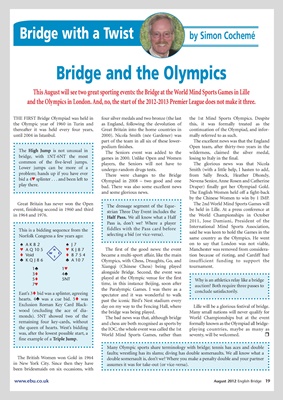 Bridge and the Olympics

This August will see two great sporting events: the Bridge at the World Mind Sports Games in Lille

THE FIRST Bridge Olympiad was held in four silver medals and two bronze (the last the 1st Mind Sports Olympics. Despite

the Olympic year of 1960 in Turin and as England, following the devolution of this, it was formally treated as the

thereafter it was held every four years, Great Britain into the home countries in continuation of the Olympiad, and infor-

podium finishes. Open team, after thirty-two years in the

The High Jump is not unusual in The Seniors event was added to the wilderness, claimed the silver medal,

bridge, with 1NT-6NT the most games in 2000. Unlike Open and Women losing to Italy in the final.

common of the five-level jumps. players, the Seniors will not have to The glorious news was that Nicola

Lower jumps can be more of a undergo random drugs tests. Smith (with a little help, I hasten to add,

problem; hands up if you have ever There were changes to the Bridge from Sally Brock, Heather Dhondy,

play there. bad. There was also some excellent news Draper) finally got her Olympiad Gold.

and some glorious news. The English Women held off a fight-back

by the Chinese Women to win by 1 IMP.

event, finishing second in 1960 and third strian Three Day Event includes the be held in Lille. At a press conference at

in 1964 and 1976. Half Pass. We all know what a Half the World Championships in October

Pass is, don’t we? Where a player 2011, Jose Damiani, President of the

fiddles with the Pass card before International Mind Sports Association,

Norfolk Congress a few years ago: selecting a bid (or vice-versa).

same country as the Olympics. He went

t Void S t 8754 became a multi-sport affair, like the main tion because of rioting, and Cardiff had

® KQJ86 ® A 10 7 Olympics, with Chess, Draughts, Go, and insufficient funding to support the

3t 4® alongside Bridge. Second, the event was

7™ time, in this instance Beijing, soon after auction? Both require three passes to

the Paralympic Games. I was there as a conclude satisfactorily.

East’s 3t bid was a splinter, agreeing spectator and it was wonderful to walk

hearts. 4® was a cue bid. 5t was past the iconic Bird’s Nest stadium every

Exclusion Roman Key Card Black- day on my way to the Fencing Hall, where Lille will be a glorious festival of bridge.

wood (excluding the ace of dia- the bridge was being played. Many small nations will never qualify for

monds). 5NT showed two of the The bad news was that, although bridge World Championships but at the event

remaining four key-cards, without and chess are both recognised as sports by formally known as the Olympiad all bridge-

the queen of hearts. West’s bidding the IOC, the whole event was called the 1st playing countries, maybe as many as

was, after the lowest possible start, a World Mind Sports Games, rather than seventy, will be welcomed. r

fine example of a Triple Jump.

Many Olympic sports share terminology with bridge; tennis has aces and double

faults; wrestling has its slams; diving has double somersaults. We all know what a

The British Women won Gold in 1964 double somersault is, don’t we? Where you make a penalty double and your partner

in New York City. Since then they have assumes it was for take-out (or vice-versa).

been bridesmaids on six occasions, with