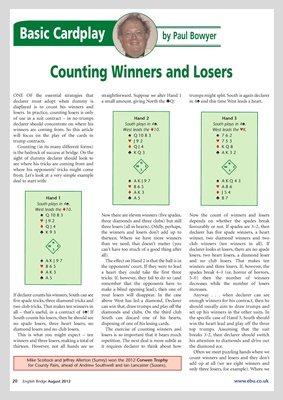 ONE OF the essential strategies that straightforward. Suppose we alter Hand 1 trumps might split. South is again declarer

declarer must adopt when dummy is a small amount, giving North the ®Q: in 4´ and this time West leads a heart.

displayed is to count his winners and

losers. In practice, counting losers is only

Counting (in its many different forms) t QJ4 t KQ8

sight of dummy declarer should look to

see where his tricks are coming from and N N

from. Let’s look at a very simple example

´ Q 10 8 3 Now there are eleven winners (five spades, Now the count of winners and losers

t QJ4 three losers (all in hearts). Oddly, perhaps, favourably or not. If spades are 3–2, then

® K93 the winners and losers don’t add up to declarer has five spade winners, a heart

thirteen. Where we have more winners winner, two diamond winners and two

N than we need, that doesn’t matter (you club winners (ten winners in all). If

S can’t have too much of a good thing after declarer looks at losers, there are no spade

´ AKJ97 The effect on Hand 2 is that the ball is in and no club losers. That makes ten

™ 865 the opponents’ court. If they were to lead winners and three losers. If, however, the

t AK3 a heart they could take the first three spades break 4–1 (or, horror of horrors,

make a blind opening lead), then one of increases.

If declarer counts his winners, South can see your losers will disappear. In the case Anyway . . . when declarer can see

five spade tricks, three diamond tricks and above West has led a diamond. Declarer enough winners for his contract, then he

all – that’s useful, in a contract of 4´! If diamonds and clubs. On the third club set up his winners in the other suits. In

South counts his losers, then he should see South can discard one of his hearts, the specific case of Hand 3, South should

no spade losers, three heart losers, no disposing of one of his losing cards. win the heart lead and play off the three

diamond losers and no club losers. The exercise of counting winners and top trumps. Assuming that the suit

This is what you might expect – ten losers is so important that it bears much breaks 3-2, then declarer should switch

winners and three losers, making a total of repetition. The next deal is more subtle as his attention to diamonds and drive out

thirteen. However, not all hands are so it requires declarer to think about how the diamond ace.

Often we meet puzzling hands where we

count winners and losers and they don’t

for County Pairs, ahead of Andrew Southwell and Ian Lancaster (Sussex). add up at all (we see eight winners and

only three losers, for example). Where we