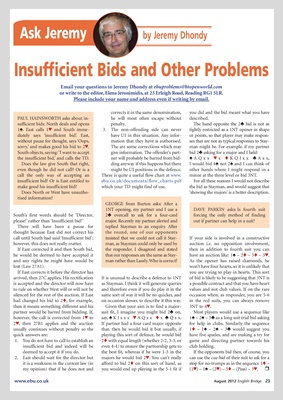 Insufficient Bids and Other Problems

Email your questions to Jeremy Dhondy at ebuproblems@btopenworld.com

Please include your name and address even if writing by email.

corrects it in the same denomination, you did and the bid meant what you have

PAUL HAINSWORTH asks about in- he will most often escape without described.

sufficient bids: North deals and opens penalty. The hand opposite the 2® bid is not as

1´. East calls 1™ and South imme- 3. The non-offending side can never tightly restricted as a 1NT opener in shape

diately says ‘insufficient bid’. East, have UI in this situation. Any infor- or points, so that player may make respon-

without pause for thought, says ‘Oops, mation that they have is authorised. ses that are not as typical responses to Stay-

sorry,’ and makes good his bid to 2™. The are some corrections which may man might be. For example, if my partner

South objects, saying: ‘I want to accept give information. The offender’s part- bid 2® asking for a major and I held:

Does the law give South that right, ding anyway if this happens but there I would bid 4´ not 2´ and I can think of

even though he did not call? Or is a might be UI positions in the defence. other hands where I might respond in a

call the only way of accepting an There is quite a useful flow chart at www. minor at the three level or bid 3NT.

insufficient bid? Or is East entitled to ebu.co.uk/documents/flow_charts.pdf For all these reasons I would not describe

make good his insufficient bid? which your TD might find of use. the bid as Stayman, and would suggest that

Does North or West have unautho- ‘showing the majors’ is a better description.

GEORGE from Burton asks: After a

1NT opening, my partner and I use a DAVE PARKIN asks: Is fourth suit

South’s first words should be ‘Director, 2® overcall to ask for a four-card forcing the only method of finding

please!’ rather than ‘Insufficient bid!’ major. Recently my partner alerted and out if partner can help in a suit?

There will have been a pause for replied Stayman to an enquiry. After

thought because East did not correct his the round, one of our oppo nents

call until South had said ‘Insufficient bid’; insisted that we could not call it Stay- If your side is involved in a constructive

however, this does not really matter. man, as Stayman could only be used by auction i.e. no opposition involvement,

If East corrected it and then South bid, the responder. I disagreed and stated then in addition to fourth suit you can

and any rights he might have would be man rather than Landy. Who is correct? As the opener has raised diamonds, he

If East corrects it before the director has you are trying to play in hearts. This sort

arrived, then 27C applies. His rectification It is unusual to describe a defence to 1NT of bid is likely to be suggesting that 3NT is

is accepted and the director will now have as Stayman. I think it will generate queries a possible contract and that you have heart

to rule on whether West will or will not be and therefore even if you do play it in the values and not club values. If on the rare

silenced for the rest of the auction. If East same sort of way it will be no quicker, and occasion when, as responder, you are 5-6

had changed his bid to 2t, for example, on occasion slower, to describe it this way. in the red suits, you can always remove

then it means something different and his Given that your aim is to find a major- 3NT to 4™.

partner would be barred from bidding. If, suit fit, I imagine you might bid 2® on, Most players would use a sequence like

2™, then 27B1 applies and the auction If partner had a four card major opposite for help in clubs. Similarly the sequence

quick answers are: playing this sort of defence, he would bid have five spades, and are making a try for

1. You do not have to call to establish an 2t with equal length (whether 2-2, 3-3, or game and directing partner towards his

insufficient bid and indeed will be even 4-4) to ensure the partnership gets to club holding.

deemed to accept it if you do. the best fit, whereas if he were 1-3 in the If the opponents bid then, of course, you

2. East should wait for the director but majors he would bid 2™. You can’t really can use the cue-bid of their suit to ask for a

it is a weakness in the current law (in afford to bid 2t on this sort of hand, as stop for no-trumps as in the sequence 1t –