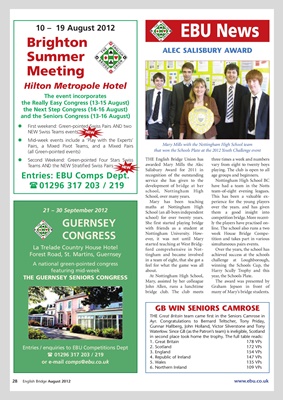 • Mid-week events include a ‘Play with the Experts’

Pairs, a Mixed Pivot Teams, and a Mixed Pairs

three times a week and numbers

vary from eight to twenty boys

Salisbury Award for 2011 in playing. The club is open to all

service she has given to the

have had a team in the Notts

School, over many years. This has been a valuable ex-

Mary has been teaching perience for the young players

maths at Nottingham High over the years. and has given

with friends as a student at

ly the players have practised on-

ever, it was not until Mary

tition and takes part in various

La Trelade Country House Hotel ford comprehensive in Not - Over the years, the school has

in a team of eight, that she got a challenge at Loughborough,

A national green-pointed congress feel for what the game was all winning the Schools Cup, the

featuring mid-week about. Harry Scully Trophy and this

Mary, assisted by her colleague The award was presented by

John Allen, runs a lunchtime Graham Jepson in front of

bridge club. The club meets many of Mary’s bridge students.

THE Great Britain team came first in the Seniors Camrose in

Waterlow. Since GB (as the Patron’s team) is ineligible, Scotland