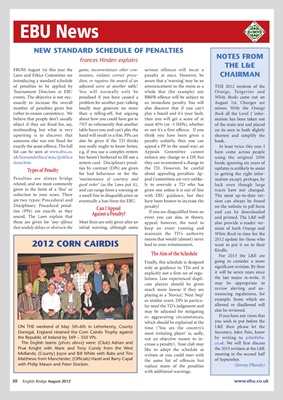 FROM August 1st this year the game, inconveniences other con- serious offences will incur a

Laws and Ethics Committee are testants, violates correct proce- penalty at once. However, be CHAIRMAN

introducing a standard schedule dure, or requires the award of an aware that a ‘warning’ may be an

of penalties to be applied by adjusted score at another table’. announcement to the room as a THE 2012 versions of the

Tournament Directors at EBU You will normally only be whole that (for example) any Orange, Tangerine and

events. The objective is not nec- penalised if you have caused a BB@B offence will be subject to White Books came out on

essarily to increase the overall problem for another pair: talking an immediate penalty. You will August 1st. Changes are

number of penalties given but loudly may generate no more also discover that if you can’t minor. With the Orange

rather to ensure consistency. We than a telling-off, but arguing play a board and it’s your fault, Book all the Level 2 infor-

object if they are fined for, say, 7NT so vehemently that another most 40% (or -3 IMPs), whether of the main text and placed

misboarding but what is very table hears you and can’t play the or not it’s a first offence. If you on its own to both slightly

upsetting is to discover that hand will result in a fine. PPs can think you have been given a shorten and simplify the

someone else was not fined for also be given if the TD thinks penalty unfairly, then you can book.

exactly the same offence. The full you really ought to know better, appeal a PP in the usual way; an At least twice this year I

list can be seen at www.ebu.co. e.g. if you use a complex system Appeals Committee cannot have come across people

uk/lawsandethics/misc/publica but haven’t bothered to fill out a enforce any change to a DP, but using the original 2006

tions.htm system card. Disciplinary penal- they can recommend a change to book; ignoring six years of

ties by contrast (DPs) are given the TD. However, be careful updates is unlikely to assist

for bad behaviour or for the about appealing penalties: Ap- in getting the right infor-

Penalties are always bridge ‘maintenance of courtesy and peal Committees are very unlike- mation except, perhaps, by

related, and are most commonly good order’ (as the Laws put it), ly to overrule a TD who has luck even though large

given in the form of a ‘fine’ or and can range from a warning or given one unless it is out of line tracts have not changed.

reduction to your score. There a small fine to disqualification or with EBU guidance, but they The most up-to-date ver-

are two types: Procedural and eventually a ban from the EBU. have been known to increase the sion can always be found

Disciplinary. Procedural penal- penalty! on the website in pdf form

ties (PPs) are exactly as they

If you are disqualified from an and can be downloaded

sound. The Laws explain that

event you can also, in theory, and printed. The L&E will

these are given for ‘any offence Most fines are only given after an appeal; however, the need to also provide e-reader ver-

that unduly delays or obstructs the initial warning, although some keep an event running and sions of both Orange and

maintain the TD’s authority White Book in time for the

means that would (almost) never 2012 update for those who

2012 CORN CAIRDIS lead to your reinstatement. want to put it on to their

Finally, this schedule is designed going to consider a more

only as guidance to TDs and is significant revision. By then

cate players should be given may be appropriate to

much more leeway if they are review alerting and an-

playing in a ‘Novice’, ‘Next Step’ nouncing regulations, for

or similar event. DPs in particu- example. Items which are

lar need the TD’s judgement and allowed or disallowed will

may be adjusted for mitigating also be reviewed.

or aggravating circumstances, If you have any views that

ON THE weekend of May 5th-6th in Letterkenny, County time (‘You are the country’s L&E then please let the

The English teams (photo above) were: (Club) Adrian and crease a penalty). Your club may co.uk. We will first discuss

Midlands; (County) Joyce and Bill White with Babs and Tim written or you could start with meeting in the second half

Matthews from Manchester; (Officials) Hazel and Barry Capal the same list of offences but of September.

with Philip Mason and Peter Stocken. replace many of the penalties (Jeremy Dhondy)