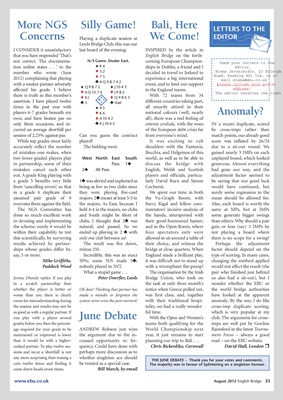 Concerns Playing a duplicate session at We Come! EDITOR

Leeds Bridge Club, this was our

I CONSIDER it unsatisfactory last board of the evening: INSPIRED by the article in

that you have responded ‘That’s English Bridge on the forth-

not correct. The documenta- N/S Game. Dealer East. coming European Champion- Send your letters to the

member who wrote (June ™ 32 decided to travel to Ireland to Elena Jeronimidis, 23 Erleigh

with a weaker partner adversely event, and to lend our support (please include your postal

to the England teams.

assertion. I have played twelve ®3 S

players 6-7 grades beneath my

own, and have beaten par on

all), there was a real feeling of

only three occasions, and in- ® K J 10 6 5 entente cordiale, with the woes IN a recent duplicate, scored

session of 2.25% against par. Can you guess the contract from everyone’s mind. match-points, our already good

While top grades must fairly played? It was exciting to rub score was inflated by 26/24

accurately reflect the number The bidding went: shoulders with the Fantonis, due to a sit-out round. We

of mistakes one makes, when Bocchis, and Helgemos of this gained nearly 3 IMPs on each

two lower-graded players play West North East South world, as well as to be able to unplayed board, which looked

in partnership, some of their Pass 1® discuss the bridge with generous. Almost everything

mistakes cancel each other 2® All Pass English, Welsh and Scottish had gone our way, and the

out. A grade King playing with players and officials, particu- adjustment factor seemed to

from ‘cancelling errors’, so that being as few as two clubs since Cochemé. would have continued, but

assumed pair grade of 9 majors. 2® meant at least 5-5 in the Vu-Graph Room, with mean should be allowed for.

overrates them against the field. the majors. As East, because I Barry Rigal and fellow com- Also, each board is worth the

The NGS Committee has held 4-4 in the majors, no clubs mentators’ incisive analysis of same at MPs, but at IMPs

done so much excellent work and South might be short of the hands, interspersed with some generate bigger swings

in devising and implementing clubs, I thought that 2® was their good-humoured banter; than others. Why should a pair

the scheme; surely it would be natural, and passed. So we and in the Open Room, where gain or lose (say) 3 IMPs by

this scientifically, by surveying only one club between us! allowed to sit around a table of there is no scope for a swing?

results achieved by partner- The result was five down, their choice, and witness the Perhaps the adjustment

ships whose grades differ by, minus 250. bridge at close quarters. When factor should depend on the

say, 5 or more. Incredibly, this was an exact England made a brilliant play, type of scoring. In many cases,

Mike Griffiths, 50%; some N/S made 5®; it was difficult not to stand up changing the method applied

Paddock Wood nobody played in 3NT. with a triumphant fist-pump! would not affect the result (the

What a stupid game . . . The organisation by the Irish pair who finished just behind

Jeremy Dhondy replies: If you play Peter Doerfler, Leeds Bridge Union, who took on us also had a sit-out), but I

whether the player is better or Oh dear! Thinking that partner has notice when Greece pulled out, the world bridge authorities

worse than you there is clearly made a mistake or forgotten the was first class, and, together have looked at the apparent

room for misunderstanding during system never wins the post-mortem! with their traditional hospi- anomaly. By the way, I do like

the session and results may not be tality, we had a really wonder- cross-imp duplicate scoring,

as good as with a regular partner. If ful time. which is very popular at my

you play with a player several June Debate With the Open and Women’s club. The arguments for cross-

maintained or improved is lower the argument due to the in- year, it just remains to start ment Focus – always a good

than it would be with a higher- creased opportunity re: fre- planning our trip to Bali . . . read – on the EBU website.

any more surprising than tossing a whether singleton ace should THE JUNE DEBATE – Thank you for your votes and comments.

coin twelve times and finding it be treated as a special case. The majority was in favour of Splintering on a singleton honour.