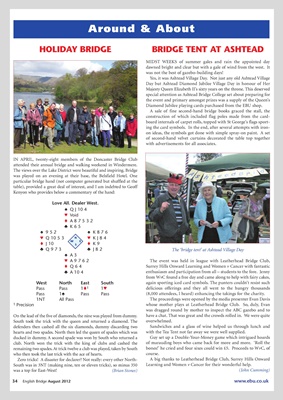 MIDST WEEKS of summer gales and rain the appointed day

dawned bright and clear but with a gale of wind from the west. It

was not the best of gazebo-building days!

Day but Ashtead Diamond Jubilee Village Day in honour of Her

special attention as Ashtead Bridge College set about preparing for

A sale of fine second-hand bridge books graced the stall, the

construction of which included flag poles made from the card-

ing the card symbols. In the end, after several attempts with iron-

on ideas, the symbols got done with simple spray-on paint. A set

of second-hand velvet curtains decorated the table top together

with advertisements for all associates.

IN APRIL, twenty-eight members of the Doncaster Bridge Club

attended their annual bridge and walking weekend in Windermere.

The views over the Lake District were beautiful and inspiring. Bridge

was played on an evening at their base, the Belsfield Hotel. One

particular bridge hand (not computer generated but shuffled at the

table), provided a great deal of interest, and I am indebted to Geoff

Kenyon who provides below a commentary of the hand:

™ A9762 The event was held in league with Leatherhead Bridge Club,

® A 10 4 enthusiasm and participation from all – students to the fore. Jenny

from WvC found a free day and came along to help with fairy cakes,

Pass 1´ Pass Pass (8,000 attendees, I heard) enhancing the takings for the charity.

On the lead of the five of diamonds, the nine was played from dummy. have a chat. That was great and the crowds rolled in. We were quite

South took the trick with the queen and returned a diamond. The overwhelmed.

defenders then cashed all the six diamonds, dummy discarding two Sandwiches and a glass of wine helped us through lunch and

hearts and two spades. North then led the queen of spades which was with the Tea Tent not far away we were well supplied.

ducked in dummy. A second spade was won by South who returned a Guy set up a Double-Your-Money game which intrigued hoards

club. North won the trick with the king of clubs and cashed the of marauding boys who came back for more and more. ‘Roll the

remaining two spades. At trick twelve a club was played, taken by South bones!’ he cried and four sixes could win £5. Proceeds to WvC, of

who then took the last trick with the ace of hearts. course.

Zero tricks! A disaster for declarer? Not really: every other North- A big thanks to Leatherhead Bridge Club, Surrey Hills Onward

South was in 3NT (making nine, ten or eleven tricks), so minus 350 Learning and Women v Cancer for their wonderful help.