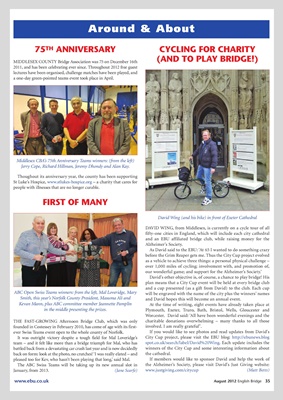 MIDDLESEX COUNTY Bridge Association was 75 on December 16th (AND TO PLAY BRIDGE!)

2011, and has been celebrating ever since. Throughout 2012 free guest

Thoughout its anniversary year, the county has been supporting

St Luke’s Hospice, www.stlukes-hospice.org – a charity that cares for

people with illnesses that are no longer curable.

David Wing (and his bike) in front of Exeter Cathedral

DAVID WING, from Middlesex, is currently on a cycle tour of all

fifty-one cities in England, which will include each city cathedral

and an EBU affiliated bridge club, while raising money for the

As David said to the EBU: ‘At 65 I wanted to do something crazy

before the Grim Reaper gets me. Thus the City Cup project evolved

as a vehicle to achieve three things: a personal physical challenge –

over 1,000 miles of cycling; involvement with, and promotion of,

our wonderful game; and support for the Alzheimer’s Society.’

David’s other objective is, of course, a chance to play bridge! His

and a cup presented (as a gift from David) to the club. Each cup

ABC Open Swiss Teams winners: from the left, Mal Loveridge, Mary will be engraved with the name of the city plus the winners’ names

Smith, this year’s Norfolk County President, Masuma Ali and and David hopes this will become an annual event.

Kevan Mann, plus ABC committee member Jeannette Pamplin At the time of writing, eight events have already taken place at

Worcester. David said: ‘All have been wonderful evenings and the

THE FAST-GROWING Afternoon Bridge Club, which was only charitable donations overwhelming – many thanks to all those

founded in Costessey in February 2010, has come of age with its first- involved. I am really grateful".

ever Swiss Teams event open to the whole county of Norfolk. If you would like to see photos and read updates from David's

It was outright victory despite a tough field for Mal Loveridge’s City Cup project, please visit the EBU blog: http://ebunews.blog

team – and it felt like more than a bridge triumph for Mal, who has spot.co.uk/search/label/David%20Wing. Each update includes the

back on form: look at the photo, no crutches! ‘I was really elated – and the cathedral.

pleased too for Kev, who hasn’t been playing that long,’ said Mal. If members would like to sponsor David and help the work of

The ABC Swiss Teams will be taking up its new annual slot in the Alzheimer’s Society, please visit David's Just Giving website: