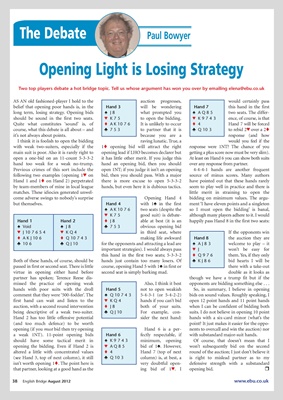 AS AN old fashioned-player I hold to the auction progresses, would certainly pass

belief that opening poor hands is, in the Hand 3 will be wondering Hand 7 this hand in the first

it’s not always about points. because you are a response (and how

I think it is foolish to open the bidding raving lunatic. True, a would you feel if the

with weak two-suiters, especially if the 1t opening bid will attract the right response were 1NT? The chance of you

main suit is poor. Also it is rarely right to opening lead if LHO becomes declarer but getting a plus score now must be very slim).

hand too weak for a weak no-trump. hand an opening bid, then you should over any response from partner.

Previous crimes of this sort include the open 1NT; if you judge it isn’t an opening 4-4-4-1 hands are another frequent

following two examples (opening 1™ on bid, then you should pass. With a major source of minus scores. Many authors

by team-members of mine in local league hands, but even here it is dubious tactics. seem to play well in practice and there is

matches. These idiocies generated unwel- little merit in straining to open the

but themselves. Hand 4 with 1´ in the first ment ‘I have eleven points and a singleton

™ K75 good suit) is debate- although many players adhere to it. I would

important strategies). I would always pass ™ J won’t be easy for

Both of these hands, of course, should be hands just contain too many losers. Of ® KJ86 bid hearts I will be

passed in first or second seat. There is little course, opening Hand 5 with 1´ in first or there with a take-out

virtue in opening either hand before second seat is simply barking mad. double as it looks as

partner has spoken; Terence Reese dis- though we have a trump fit but if the

missed the practice of opening weak Also, I think it best opponents are bidding something else . . .

hands with poor suits with the droll Hand 5 not to open weakish So, in summary, I believe in opening

auction, with a second round intervention t J8 both of your suits. when I can be confident of bidding both

being descriptive of a weak two-suiter. ® Q J 10 For example, con- suits. I do not believe in opening 10 point

Hand 2 has too little offensive potential sider the next hand: hands with a six-card minor (what’s the

(and too much defence) to be worth point? It just makes it easier for the oppo-

should have some tactical merit in ´ K9743 minimum, opening Of course, that doesn’t mean that I

opening the bidding. Even if Hand 2 is ™ AQ85 bid of 1´. However, won’t subsequently bid on the second

altered a little with concentrated values t 4 Hand 7 (top of next round of the auction; I just don’t believe it

isn’t worth opening 1t. The point here is very doubtful open- defensive strength with a substandard

that partner, looking at a good hand as the ing bid of 1™. I opening bid. r