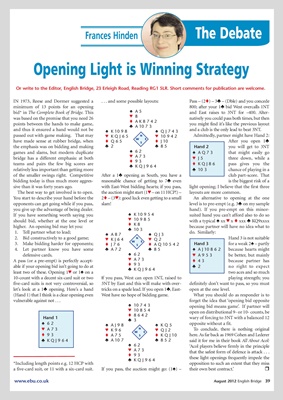 minimum of 13 points for an opening 800; after your 1® bid West overcalls 1NT

was based on the premise that you need 26 ™ 8 natively you could pass both times, but then

games and slams, but modern duplicate ´ 62 ´ AQ73 that might easily go

bridge has a different emphasis: at both ™ A73 ™ J5 three down, while a

of the smaller swings right. Competitive After a 1® opening as South, you have a club part-score. That

sive than it was forty years ago. with East-West bidding hearts; if you pass, light opening; I believe that the first three

You start to describe your hand before the 2t – (3™): good luck even getting to a small An alternative to opening at the one

opponents can get going while if you pass, slam! level is to pre-empt (e.g. 3® on my sample

you give up the advantage of being dealer. hand). If you pre-empt on this minor-

higher. An opening bid may let you: t K8 because partner will have no idea what to

10-count with a decent six-card suit or two If you pass, West can open 1NT, raised to playing strength; you

five-card suits is not very controversial, so 3NT by East and this will make with over- definitely don’t want to pass, so you must

(Hand 1) that I think is a clear opening even West have no hope of bidding game. What you should do as responder is to

vulnerable against not . . . forget the idea that ‘opening bid opposite

Hand 1 wary of forcing to 3NT with a balanced 12

™ QJ2 To conclude, there is nothing original

these light openings frequently impede the

*Including length points e.g. 12 HCP with opposition to such an extent that they miss