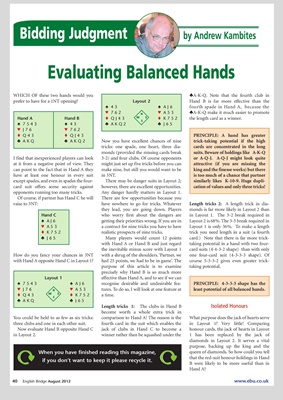 WHICH OF these two hands would you ®A-K-Q. Note that the fourth club in

prefer to have for a 1NT opening? Layout 2 Hand B is far more effective than the

tricks: one spade, one heart, three dia- cards are concentrated in the long

I find that inexperienced players can look 3-2) and four clubs. Of course opponents or A-Q-J. A-Q-J might look quite

at it from a negative point of view. They might just set up five tricks before you can attractive (if you are missing the

can point to the fact that in Hand A they make nine, but still you would want to be king and the finesse works) but there

have at least one honour in every suit in 3NT. is too much of a chance that partner

except spades, and even in spades the four- There may be danger suits in Layout 2; similarly likes K-10-9. Huge dupli-

card suit offers some security against however, there are excellent opportunities. cation of values and only three tricks!

opponents running too many tricks. Any danger hardly matters in Layout 1.

Of course. if partner has Hand C he will There are few opportunities because you

raise to 3NT: have nowhere to go for tricks. Whatever Length tricks 2: A length trick in dia-

they lead, you are going down. Players monds is far more likely in Layout 2 than

Hand C who worry first about the dangers are in Layout 1. The 3-2 break required in

t K752 realistic prospects of nine tricks. trick you need length in a suit (a fourth

® J65 Many players would count 12 points card.) Note that there is far more trick-

purpose of this article is to examine taking potential.

precisely why Hand B is so much more

Layout 1 effective than Hand A, and to see if we can

Length tricks 1: The clubs in Hand B Isolated Honours

become worth a whole extra trick in

You could be held to as few as six tricks: comparison to Hand A! The reason is the What purpose does the jack of hearts serve

three clubs and one in each other suit. fourth card in the suit which enables the in Layout 1? Very little! Comparing

Now evaluate Hand B opposite Hand C jack of clubs in Hand C to become a honour cards, the jack of hearts in Layout

in Layout 2. winner rather than be squashed under the 1 has been replaced by the jack of

diamonds in Layout 2. It serves a vital

purpose, backing up the king and the

When you have finished reading this magazine, queen of diamonds. So how could you tell

that the red-suit honour holdings in Hand

if you don’t want to keep it please recycle it.

B were likely to be more useful than in