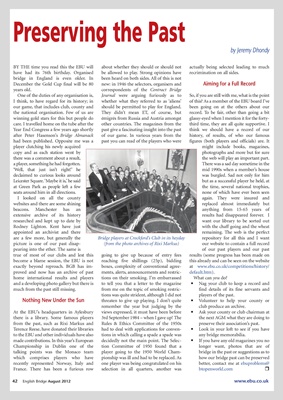 Preserving the Past by Jeremy Dhondy

have had its 76th birthday. Organised be allowed to play. Strong opinions have recrimination on all sides.

bridge in England is even older. In been heard on both sides. All of this is not

December the Gold Cup final will be 80 new: in 1946 the selectors, organisers and Aiming for a Full Record

One of the duties of any organisation is, Journal were arguing furiously as to So, if you are still with me, what is the point

I think, to have regard for its history; in whether what they referred to as ‘aliens’ of this? As a member of the EBU board I’ve

our game, that includes club, county and should be permitted to play for England. been going on at the others about our

the national organisation. Few of us are They didn’t mean ET, of course, but record. To be fair, other than going a bit

care. I travelled home on the tube after the other countries. The magazines from the third time, they are all quite supportive. I

after Peter Hasenson’s Bridge Almanack of our game. In various years from the history, of results, of who our famous

had been published. Opposite me was a past you can read of the players who were figures (both players and officials) are. It

player clutching his newly acquired might include books, magazines,

there was a comment about a result, the web will play an important part.

a player, something he had forgotten. There was a sad day sometime in the

declaimed to curious looks around was burgled. Sad not only for him

Leicester Square. ‘Maybe it is,’ he said but as a successful player he held, at

at Green Park as people left a few the time, several national trophies,

seats around him in all directions. none of which have ever been seen

I looked on all the county again. They were insured and

websites and there are some shining replaced almost immediately but

beacons. Manchester has an anything from 15-65 years of

extensive archive of its history results had disappeared forever. I

Rodney Lighton. Kent have just with the chaff going and the wheat

appointed an archivist and there remaining. The web is the perfect

are a few more, but generally the Bridge players at Crockford’s Club in its heyday repository for all this and I want

pearing into the ether. The same is of our past players and our past

become a blame session, the EBU is not reaching five shillings (25p), bidding this already and can be seen on the website

exactly beyond reproach. BGB has im- boxes, complexity of conventional agree- at www.ebu.co.uk/competitions/history/

proved and now has an archive of past ments, alerts, announcements and restric- default.htm).

home international results and players tions on their smoking. I’m embarrassed What can you do?

much from the past still missing. from me on the topic of smoking restric- find details of its fine servants and

tions was quite strident, although I did not players of the past.

Nothing New Under the Sun threaten to give up playing. I don’t quite • Volunteer to help your county or

remember the year but judging by the club produce an archive.

At the EBU’s headquarters in Aylesbury views expressed, it must have been before • Ask your county or club chairman at

there is a library. Some famous players 3rd September 1984 – when I gave up! The the next AGM what they are doing to

from the past, such as Rixi Markus and Rules & Ethics Committee of the 1950s preserve their association’s past.

Terence Reese, have donated their libraries had to deal with applications for conven- • Look in your loft to see if you have

to the EBU and other individuals have also tions in which calling a spade a spade was any bridge memorabilia.

made contributions. In this year’s European decidedly not the main point. The Selec- • If you have any old magazines you no

Championship in Dublin one of the tion Committee of 1950 found that a longer want, photos that are of

which comprises players who have pionship was ill and had to be replaced. As how our bridge past can be preserved

recently represented Norway, Italy and one player was being congratulated on his better, contact me at ebuproblems@

France. There has been a furious row selection in all quarters, another was btopenworld.com r