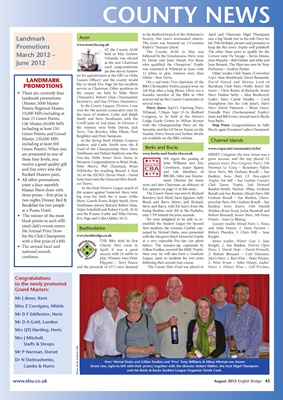 Landmark Avon Society, this year’s nominated charity. says a big ‘thank you’ to his wife Dory for

www.avoncba.org.uk The event was featured on 3-Counties his 70th birthday present and promises to

Promotions AT the County AGM

by Derek and Janet Marsh. For those Joan Murphy – Bob Holder and Mike and

who qualified, the Champions’ Trophy Joan Bennett. The Plate was won by Tony

was contested at Wilstead in June; with Parkinson – Andrew Parker.

are also due to Andrew

on his appointment at the EBU as Clubs

LANDMARK Liaison Officer) and the county would

On a sad note, Vice-chairman of the David Herod and Norma Lord of

PROMOTIONS service as Chairman. Other positions in

3rd May after a long illness. Chris was a Scerri – Chris Burley of Richards. Senior

• There are currently four the county are held by Mike Short

In the County Leagues, Division 1 was

won for the second consecutive year by

the team of Andrew, Cathy and Ralph

Congress, to be held at the Heron’s Janet and Bill Irvine. Annual match: Bucks

least 25 Green Points; Smith and Steve Tomlinson, with the

with the Championship Pairs on the Stop Press: Congratulations to Sally

including at least 150 the winners were Mike Davies, Jack

Saturday and the GP Swiss Teams on the Brock, again European Ladies Champion!

including at least 600 Andrew and Cathy Smith won the B

Green Points). When you Final of the Championship Pairs. Steve Berks and Bucks www.cwgsy.net/community/cicba/

are promoted to one of Tomlinson and Nelson Stephens won the www.berks-and-bucks-cba.co.uk JERSEY Congress: the new venue was a

these four levels, you One-day Welsh Senior Swiss Teams in WE regret the passing of great success, and the top placed CI

and free entry into the Wibberley for reaching Round 6 (last and Life Members of Swiss Pairs, 8th Graham Boxall – Sue

• All other promotions Jones have won the Gloucestershire Knock-

ment Director for many Trophy, Pat Self – Sue Corbet; Country

In the final Western League match of Eric appears on page 12 in this issue. Basden-Smith, Marion Miles, Graham

Master Point draw with the season against Somerset there were The County Teams was won by Richard Boxall and Sue Rankin; Mixed Pairs, 8th

at a Puma Hotel. Aidan Schofield and Robert Covill, 20-0) losing finalists, were 4th in the Pachabo, Walden, Brian Youd, Jackie Rumball and

and the B team (Cathy and Mike Davies,

• The winner of the most

only 1 VP behind the joint seconds.

We were delighted to be able to re-

black points in each affil-

for the Club Champions www.bedsbridge.co.uk with the Margaret Hatch Memorial Trophy Knight.

with a first prize of £400. THE BBA held its first at a very enjoyable Pro-Am (see photo Jersey results: Winter Cup: 1. Jane

• The annual local and Charity Pairs event in

April; it was a great

below). The runners-up, captained by

national awards success with 14 tables in Next year we will also have a Graduate 2. Robert Brouard – Carl Harrison.

and the proceeds of £571 were donated The County Pairs Final was played in Pairs: 1. Hilary Wise – Gill Pitcher,

to the newly promoted

Cambs & Hunts (front row, right-to left with their prizes) together with the director Anders Wallen, the host Nigel Thompson