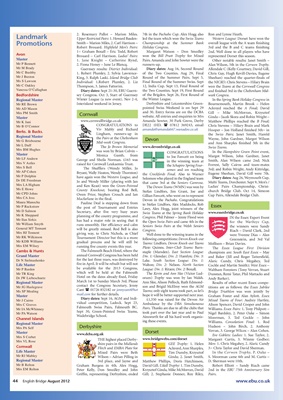 Championship at the Summer Bank

overall league with the A team finishing

3rd and the B and C teams finishing

Bedfordshire sey Congress. Oct 3, Start of Guernsey of the Brigden. Sept 26, First Round of week Congress.

to Joe Fawcett on being

George and Sheila Norman. £165 was in the winning team at Smith, Alan Wilson came 2nd; Nick

The Devon Teams (WMN) was won by

Gillian Fawcett, who went on to represent

Mrs CA Joss Macfarlane in the final. Devon in the Pachabo. Congratulations

Mr P Rackstraw the post of Tournament and Entries Lawy, Alex Hogg, joint winners of the

Mr Ilan Sirkis has had a major role in seeing that it the Open Swiss Pairs and came 4th in the for the Warboys Cup,

Mr William Smyth runs smoothly. Her efficiency and calm Seniors Swiss Pairs at the Welsh Seniors the winners were Sandy

Mrs HJ Tennent giving way, to Chris Nichols, as Chief Well done to the winning teams in the were Yvonne Dias – Alan

Life Master fire in April. It will be rebuilt but will not Walton; Div. 2: Nelson. North Section Cockle and Martin Smith); West Essex –

Mr TR King which will be held at the Falmouth The Kevin and Ann Slee (Victor Lud- Dunstan, Remi Tatur, Phil Mattacks and

Master mail.com for further details. hope it will be better supported next year. Graham Foster and Alan Aylott. Essex

Falmouth Swiss Pairs, Falmouth BC. Pairs. Thanks are due to all the clubs that Williams. Essex Pairs: 1. Tony Philpott –