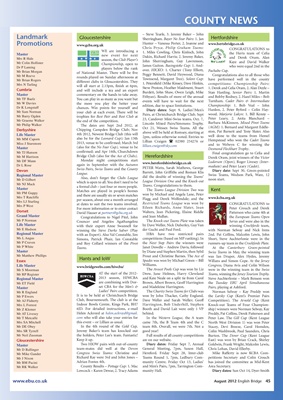 WE are introducing a 1. Miles Cowling, Chris Kinloch, John

Master the Herts team of Celia

Dr P Laming who were equal 2nd in the

players below the rank over. HICKO: 1. Charter (Tony Elliott,

of National Master. There will be five Peggy Bennett, David Heywood, Diana

Mr M Reeve Congratulations also to all those who

Mr Brian Rogers have performed well in the county

will all start at 2.15pm, finish at 6pm, Steve Preston, Heather Maidment, Stuart

and will include a tea and an expert

Master commentary on the hands to take away.

Fithyan). Results of more of the annual and Bobby Rodney, 2. Hazel Miles – Bob

events will have to wait for the next Turnham. Cadet Pairs & Intermediate

Mr W Davies the more you play the better your

Dr K Longstaff chances. Win points for yourself and

Mr Sam Norman your club at each event. There will be

Mr Graeme Walker the end of the competition.

4th 2012, Newent Bridge Club (this will above will be held at Romsey, starting at

Life Master well done to the teams from Hemel

also be for the Leonard Cup); Jan 13th 2pm, unless otherwise noted. Entries to

Miss J Starsmore and to Welwyn C for winning the

(also for the No Fear Cup), venue to be lillian.craigen@sky.com

again in September with the Autumn www.herefordshirebridge.co.uk

Regional Master did the double of winning the Teams’

which is open to all. You don’t need to be League Division One and the Knock-out

Matches are played in people’s homes

and there are usually six or seven matches

Flagg and Derek Wolfendale; and the www.kcba.org.uk

per season, about one a month arranged

at dates to suit the two teams involved. Restricted Teams League was won by CONGRATULATIONS to

For more information or to enter contact Peter Crouch and Derek

Ms L Angus Simons, Patrick Phair, Ian Constable competitions (based on MP ranking). In Short, Steve Auchterlonie were in the

Mr P Craven and Roy Collard winners of the Pivot the Next Step Pairs the winners were runners-up team in the Crockfords Plate.

Master by Diane and Stephen Martin, then Sybil Swiss Teams in May, the winning team

Essex Hants and IoW Spades was won by Michael Green – Bill Willans and Simon Cope. At the Jersey

Master set CBA for the Men’s & and Madeleine Harrington. Pairs, playing at Ashford.

Mr P Ewers It is to be held at Christchurch Bridge won by John Thacker, Cathy England, the Larsky Cup (Kent’s Premier Pairs

Mr T Metcalfe com who will also take your entries for In the Western League, the A team Peter Law. The Gill Cup (Kent League

Mrs SA Mitchell this event – or Lillian as usual. came 7th, the B Team 4th and the C North West Division 1) was won Peter

Mr DE Obey In the 4th round of the Gold Cup, team 8th. Overall, we were 7th. Not a Stacey, Devi Breeze, Carol Homden,

Gloucestershire Keep it up. are on our website. East) was won by Brian Crack, Shirley