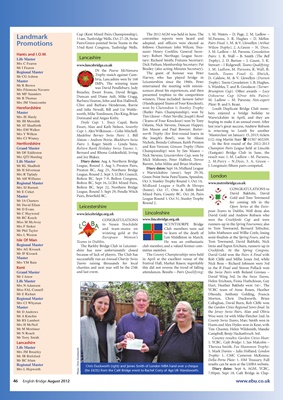 Promotions Pairs/Green-pointed Swiss Teams in the

adopted, and officers were elected as

Regional Master IN the Pearse McNamara

Brearley, Ewart Evans, David Briggs, scences about his experiences, and then Brumpton Cup). Other awards – Lucy

Mr JA Charters for coming 4th in the

Leicestershire Open Series at the Euro-

CONGRATULATIONS won the Crockfords Cup and were

and team-mates on Club members were sad to Tom Townsend, Bernard Teltscher,

win ning gold at the to learn of the death of John Matheson and Willie Coyle, losing

Euro pean Women’s Len Middleton in March. semi-finalists at the Spring Fours, and to

Isle Of Man Teams in Dublin. He was an enthusiastic Tom Townsend, David Bakhshi, Nick

Mr JF Kissack because of lack of players. The Club has The County Championships were held David Gold won the Pairs A Final with

Master successfully run an Annual Charity Swiss in April at the excellent venue of the Rob Cliffe and Millie Jones 3rd, while

Mr A Kinchin Woo were 1st with Mike Fletcher 2nd. In

Mrs L Hepworth (for £635) from the Café Bridge event to Rachel Corry of Age UK Wandsworth.