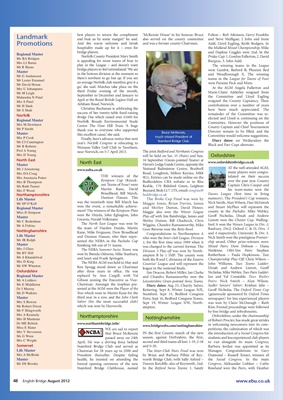 Landmark and beat us by some margin!’ he said. also served on the county committee and Steve Mulligan; 2 John and Irene

Promotions And the warm welcome and lavish

hospitality made up for it – even for

and was a former county Chairman. Auld, Lloyd Eagling, Keith Rodgers. In

bridge players. and Daphne Coggles were 2nd. In the

is appealing for more teams of four to Burgess, 3. John Auld.

bridge players to feel intimidated: ‘We are were Gambit, Retford B, Phoenix Red

in the bottom division at the moment so and Woodborough X. The winning

there’s nowhere to go but up. If you are teams in the League for Teams of Four

an average Norfolk club member, give it a were Parsons Pack and Minx.

go,’ she said. Matches take place on the At the AGM Angela Fullerton and

third Friday evening of the month, Marie-Claire Adderley resigned from

September to December and January to the Committee and Lloyd Eagling

April at the Royal British Legion Hall on resigned the County Captaincy. Their

Aylsham Road, Norwich. contributions over a number of years

Christine Buchanan is celebrating the have been much appreciated. The

Committee. However the positions of

Centre The How Hill Trust. ‘A huge County Captain and Chief Tournament

Mr P Smith thank you to everyone who supported

Bruce McKenzie, Director remain to be filled, and the

Master this excellent cause,’ she said.

much missed President of Committee would welcome suggestions.

Prof A Young near Norwich, on 5-7 April 2013. The joint Bedford and Northants Congress

Mrs D Young will be held on Sat. 15 (Pairs) and Sun. Oxfordshire

Mrs Anastasia Potter THE winners of the 9LG. Entries can be made online on the tulated on their success

Mrs B Thompson Kempson Cup (Knock- Bedfordshire CBA website or to Rita over the past year. County

won the event, a remarkable achieve- and Shirley Dutton, David Flower. and Stuart McPhee will represent the

ment! The winners of the Kempson Plate Maggie also won the Winter League county in the Pachabo. Mike Webley,

The North East League was won by Wiggins, Chandra Ramamoorthy, Mike ford A won the Wessex League in Div. 1;

who won the Inter-club League, Division

Mr JR Rolph sented the NEBA in the Pachabo Cup 1, for the first time since 1989 when it ship award. Other prize-winners were:

was changed to the current format. The

Division 3 Play-off was won by North-

Mr A Khandelwal and Janet and Frank Springett. both the B and C divisions of the Eastern Championship Play-Off: Chris Wilson –

Mrs D King The NEBA AGM was held in May and Counties’ League and will represent the John Williams. Tues Teams Ladder:

Dr J Murray sented at the AGM were the Player of the Kettering. Sept 8, Winter League N/E, Geoff Nicholas. The Oxford Times Cup

Mrs A Kennedy Oxfordshire, under the chairmanship

Mrs H Masheter of Robert Procter, has made great strides

Dr ME Rebick www.northantsbridge.info/ in welcoming newcomers into its com-

WE are sad to report petitions, the culmination of which was

Mrs C Wright April. He was a driving force behind second and third teams all lost: 1-19, 2-18 to run alongside its main Congress;

Somerset Stamford Bridge Club and served as and 0-20. Barbara Jordan was appointed as its

Life Master Chairman for 28 years up to 2000 and The Inter-Club Pairs Final was won Manager. Congratulations to Gary

Mrs A McBride President thereafter. Despite failing by Brian and Barbara Pilbin of Key- Diamond – Russell Tenzer, winners of

Master health, he insisted on attending the worth Bridge Club, with Sally Axford – the Social Congress. In the main