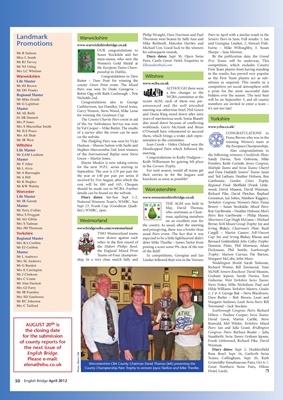 Philip Wraight, Dave Harrison and Paul Pairs in April with a similar result in the

OUR congratulations to for subsequent rounds. Sharpe – Jane Morton .

Mr B Salmon Susan Stockdale and her

team-mates, who won the Pairs, Castle Green Hotel. Enquiries to Prix Teams will be underway. This

the European Teams Cham- First Team players from having standing

Mrs LC Whitlam pionship in Dublin. in the results, has proved very popular

Life Master Rutter – Dave Pratt for winning the stitutes as required. This results in a

Pairs was won by Dodo Georgevic – ALTHOUGH there were

Mr DG Franks a prize for the most successful slam

Robin Ogg with Ruth Coubrough – Pete a few changes to the

Regional Master WCBA committee at the bidders over the season. The next heat

Mr Mike Gould Nicholds 2nd. will be on September 3, and all county

Congratulations also to George recent AGM, each of them was pre-

Mr AE Balfe and Diana King stood down after nine

for winning the Goodman Cup.

Mrs P Jones also stood down because of conflicting

of the Air Ambulance Service was won

Mrs AS Shah on the website. them, which brings a wider club repre- Fiona Brown who was in the

Mr JR West The Fledgling Pairs was won by Vicki sentation to the committee. winning Women’s team at

for the next W.P.L. series starting in in the Corwen Trophy. Multiple Teams and Swiss Teams: Cheryl

September. The cost is £70 per pair for For next season, would all teams get and Dave Duddell; Seniors’ Teams: Janet

the year or £40 per pair per series if their entries in for the leagues and and Ted Latham, Heather Hobson, Roy

Mr A Hill knockout as soon as possible?

cost will be £80 and £45. Cheques Regional Final: Sheffield (Frank Little-

should be made out to WCBA. Further Worcestershire wood, David Musson, David Waxman,

Worcester details can be found on the website. Richard Pike, David Fletcher, Raphael

THE AGM was held in

who continues as Chair-

Westmorland on an excellent year for

Mrs JM Thomson www.bridgewebs.com/westmorland and prizegiving, there was a briefer than Irving Blakey; Chairman’s Plate: Bazil

Regional Master were drawn against each expected to be a little lighthearted didn’t Cup: Joy and Irving Blakey, Rhona and

Mrs KA Crebbin other in the first round of deter Mike Theelke – James Taylor from Bernard Goldenfield; John Colley Trophy:

ship. In a very close match Sally and Lineker followed their win in the Veterans Margaret McCabe, John Moor.

the next issue of Diary dates: Sept 2, Huddersfield