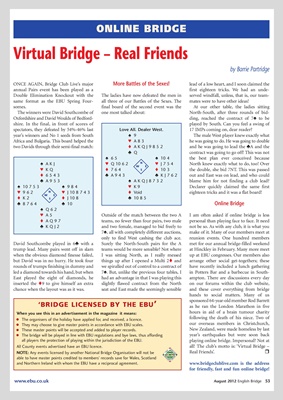 ONCE AGAIN, Bridge Club Live’s major More Battles of the Sexes! lead of a low heart, and I soon claimed the

annual Pairs event has been played as a first eighteen tricks. We had an unde-

Double Elimination Knockout with the The ladies have now defeated the men in served windfall, unless, that is, our team-

same format as the EBU Spring Four- all three of our Battles of the Sexes. The mates were to have other ideas!

somes. final board of the second event was the At our other table, the ladies sitting

The winners were David Southcombe of one most talked about: North-South, after three rounds of bid-

Oxfordshire and David Woulds of Bedford- ding, reached the contract of 7´ to be

shire. In the final, in front of scores of played by South. Can you feel a swing of

two Davids through their semi-final match: t AKQJ9852 and he was going to lead the ®A and the

® Q contract was going to go off! This was not

® KQJ2 and two female, managed to bid freely to not be so. As with any club, it is what you

7´, all with completely different auctions, make of it. Many of our members meet at

only to find West cashing the club ace. reunion events. One hundred members

trump lead. Many pairs went off in slam teams would be more sensible? Not where at Hinckley in February. Many more meet

when the obvious diamond finesse failed, I was sitting North, as I really messed up at EBU congresses. Our members also

but David was in no hurry. He took four things up after I opened a Multi 2t and arrange other social get-togethers; these

led a diamond towards his hand, but when 7´. But, unlike the previous four tables, I in Potters Bar and a barbecue in South-

East played the eight of diamonds, he had an advantage in that I was playing this ampton. There are discussions every day

inserted the t9 to give himself an extra slightly flawed contract from the North on our forums within the club website,

chance when the layout was as it was. seat and East made the seemingly sensible and these cover everything from bridge

hands to social matters. Many of us

When you see this in an advertisement in the magazine it means: hours in aid of a brain tumour charity

following the death of his niece. Two of

• The organisers of the holiday have applied for, and received, a licence. our overseas members in Christchurch,

• These master points will be accepted and added to player records. New Zealand, were made homeless by last

• The bridge will be played in line with EBU regulations and bye laws, thus affording year’s earthquakes but were soon back

all players the protection of playing within the jurisdiction of the EBU. playing online bridge. Impersonal? Not at

All County events advertised have an EBU licence. all! The club’s motto is: ‘Virtual Bridge –

NOTE: Any events licensed by another National Bridge Organisation will not be Real Friends’. r

able to have master points credited to members’ records save for Wales, Scotland

and Northern Ireland with whom the EBU have a reciprocal agreement. www.bridgeclublive.com is the address