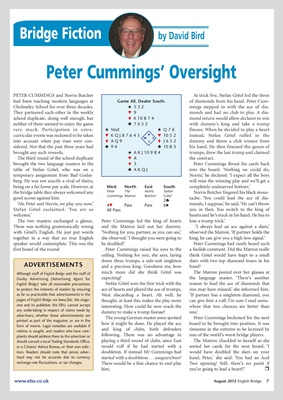 Cholmeley School for over three decades. ´ 532 mings stepped in with the ace of dia-

They partnered each other in the weekly ™ 9 monds and had no club to play. A dia-

very much. Participation in extra- ´ Void ´ Q76 finesse. When he decided to play a heart

The third round of the school duplicate ™ A the contract.

table of Stefan Götel, who was on a ® AKQJ into the board. ‘Nothing we could do,

temporary assignment from Bad Godes- Norris,’ he declared. ‘I expect all the boys

berg. He was not exactly a rival of theirs, will miss the winning play and we’ll get a

being on a far lower pay scale. However, at West North East South completely undeserved bottom.’

good scores against him. tache. ‘You could lead the ace of dia-

Stefan Götel exclaimed. ‘You are so All Pass you in then. You switch to the king of

welcome.’ hearts and he’s stuck in his hand. He has to

There was nothing grammatically wrong and the Matron laid out her dummy. ‘I always lead an ace against a slam,’

with Götel’s English. He just put words ‘Nothing for you, partner, as you can see,’ observed the Matron. ‘If partner holds the

together in a way that no true English she observed. ‘I thought you were going to king, he can give you a high-low signal.’

speaker would contemplate. This was the be doubled!’ Peter Cummings had rarely heard such

first board of the round: Peter Cummings raised his eyes to the a foolish comment. Did the Matron really

ceiling. Nothing for you, she says, laying think Götel would have leapt to a small

down three trumps, a side-suit singleton slam with two top diamond losers in his

ADVERTISEMENTS and a precious king. Goodness me, how hand?

to protect the interests of readers by ensuring ace of hearts and played the ace of trumps, you may have missed,’ she informed him.

as far as practicable that advertisements in the West discarding a heart. Ah well, he ‘If partner has a singleton diamond, you

pages of English Bridge are bona fide, the maga- thought, at least this makes the play more can give him a ruff. I’m sure I read some-

zine and its publisher, the EBU, cannot accept interesting. How could he now reach the where that two chances are better than

any undertaking in respect of claims made by dummy to make a trump finesse? one.’

advertisers, whether these advertisements are

printed as part of the magazine, or are in the

form of inserts. Legal remedies are available if

how it might be done. He played the ace board to be brought into position. It was

redress is sought, and readers who have com- and king of clubs, both defenders tiresome in the extreme to be lectured by

plaints should address them to the advertiser or following. There was no advantage in one of the world’s worst bridge players.

should consult a local Trading Standards Office, playing a third round of clubs, since East The Matron chuckled to herself as she

or a Citizens’ Advice Bureau, or their own solic- would ruff if he had started with a sorted her cards for the next board. ‘I

itors. Readers should note that prices adver- doubleton. If instead Mr Cummings had would have doubled the slam on your

tised may not be accurate due to currency started with a doubleton . . . ausgezeichnet! hand, Peter,' she said. 'You had an Acol

exchange rate fluctuations, or tax changes. There would be a fine chance to end-play Two opening! Still, there's no point if