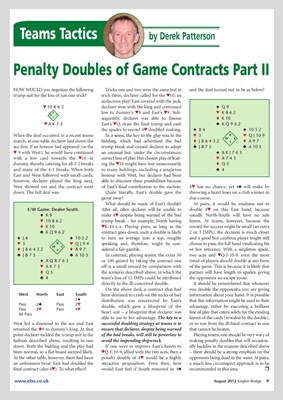 HOW WOULD you negotiate the following Tricks one and two were the same but at and the deal turned out to be as below?

trump suit for the loss of just one trick? trick three, declarer called for the ™10, an

match, at one table declarer laid down the bidding, which had advertised the bad t J86432 S t A97

™ 9 with West), he would have continued an unusual but, under the circumstances, ´ AKJ763

dummy, thereby catering for all 3-2 breaks ing the ™10 might have lost unnecessarily t Q5

and many of the 4-1 breaks. When both to many holdings, including a singleton ® 4

East and West followed with small cards, honour with West, but declarer had been

however, declarer played the king next, able to discount these possibilities because

West showed out and the contract went of East’s final contribution to the auction. 4™ has no chance, yet 4´ will make by

down. The full deal was: Quite literally, East’s double gave the throwing a heart loser on a club winner in

game away! due course.

What should be made of East’s double? At pairs, it would be madness not to

E/W Game. Dealer South. After all, often declarer will be unable to double 4™ on this East hand, because

® KQ962 contract goes down, such a double is likely 2 or 3 IMPs), the decision is much closer

™ 5 N ™ QJ94 speaking and, therefore, might be con- choose to pass, the full hand vindicating his

™ AK73 off is a small reward by comparison with of the game. This is because it is likely that

t Q5 the scenario described above, in which the partner will have length in spades, giving

® 4 team’s loss of 12 IMPs could be attributed the opponents no escape route.

directly to the ill-conceived double. It should be remembered that whenever

On the above deal, a contract that had you double the opponents, you are giving

West North East South been destined to crash on the rocks of bad information about your hand. It is possible

double, which gave a blueprint of the advantage, either by executing a brilliant

able to use to her advantage. The key to a layout of the cards (revealed by the double),

returned the t9 to dummy’s king. At that ensure that declarer, despite being warned that cannot be beaten.

point declarer tackled the trump suit in the of the bad breaks, will still be powerless to Playing teams, one should be very wary of

fashion described above, resulting in one avoid the impending shipwreck. making penalty doubles that will occasion-

down. Both the bidding and the play had If one were to improve East’s hearts to ally backfire in the manner described above

been normal, so a flat board seemed likely. ™Q-J-10-9, allied with the two aces, then a – there should be a strong emphasis on the

At the other table, however, there had been penalty double of 4™ would be a highly opponents being dead in the water. At pairs,

an unforeseen twist: East had doubled the attractive proposition. Even then, how a much less circumspect approach is to be

final contract (also 4™). To what effect? would East feel if South removed to 4´ recommended in this area. r