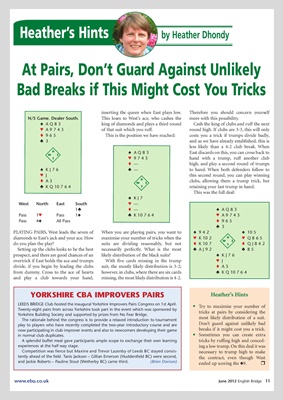 At Pairs, Don’t Guard Against Unlikely

inserting the queen when East plays low. Therefore you should concern yourself

N/S Game. Dealer South. This loses to West’s ace, who cashes the more with this possibility.

t 965 This is the position we have reached: costs you a trick if trumps divide badly,

® 3 and as we have already established, this is

less likely than a 4-2 club break. When

´ AQ83 East discards on this, you can cross back to

t — high, and play a second round of trumps

™ J this second round, you can play winning

clubs, allowing them a trump trick, but

This was the full deal:

Setting up the clubs looks to be the best necessarily perfectly. What is the most ® AJ92 ® 85

prospect, and there are good chances of an likely distribution of the black suits? ´ KJ76

divide, if you begin by leading the clubs suit, the mostly likely distribution is 3-2; t A3

and play a club towards your hand, missing, the most likely distribution is 4-2.

tricks at pairs by considering the

Yorkshire Building Society and supported by prizes from No Fear Bridge.

The rationale behind the congress is to provide a relaxed introduction to tournament most likely distribution of a suit.

now participating in club improver events and also to newcomers developing their game breaks if it might cost you a trick.

in normal club duplicates. • Sometimes you can create extra

experiences at the half way stage. ing a low trump. On this deal it was

tently ahead of the field. Tanis Jackson – Gillian Emerson (Huddersfield BC) were second, the contract, even though West