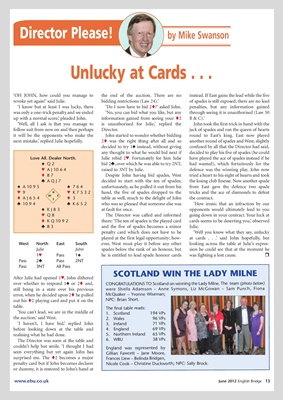 ‘OH JOHN, how could you manage to the end of the auction. There are no instead. If East gains the lead while the five

revoke yet again!’ said Julie. bidding restrictions (Law 24).’ of spades is still exposed, there are no lead

‘I know but at least I was lucky, there ‘Do I now have to bid 2t?’ asked John. penalties, but any information gained

was only a one-trick penalty and we ended ‘No, you can bid what you like, but any through seeing it is unauthorised (Law 50

up with a normal score,’ pleaded John. information gained from seeing your t2 B & C).’

‘Well, all I ask is that you manage to is unauthorised for Julie,’ replied the John took the first trick in hand with the

follow suit from now on and then perhaps Director. jack of spades and ran the queen of hearts

it will be the opponents who make the John started to wonder whether bidding round to East’s king. East now played

next mistake,’ replied Julie hopefully. 2t was the right thing after all and so another round of spades and West, slightly

decided to try 1´ instead, without giving confused by all that the Director had said,

Love All. Dealer North. Julie rebid 2™. Fortunately for him Julie have played the ace of spades instead if he

´ Q2 bid 2®, over which he was able to try 2NT, had wanted), which fortuitously for the

t 87 Despite John having bid spades, West tried a heart to his eight of hearts and took

® AQJ7 decided to start with the ten of spades; the losing club finesse. Now another spade

™ 9 N ™ K7532 hand, the five of spades dropped to the tricks and the ace of diamonds to defeat

t AJ654 S t 3 table as well, much to the delight of John the contract.

´ KJ83 at fault for once. opponents would ultimately lead to you

™ Q8 The Director was called and informed going down in your contract. Your luck at

t K Q 10 9 2 them: ‘The ten of spades is the played card cards seems to be deserting you,’ observed

® 83 and the five of spades becomes a minor Julie.

penalty card which does not have to be ‘Well you know what they say, unlucky

played at the first legal opportunity; how- at cards . . .’ said John hopefully, but

West North East South ever, West must play it before any other looking across the table at Julie’s expres-

Julie John spades below the rank of an honour, but sion he could see that at the moment he

1™ Pass 1´ he is entitled to lead spade honour cards was fighting a lost cause. r

After Julie had opened 1™, John dithered

over whether to respond 1´ or 2t and, CONGRATULATIONS TO Scotland on winning the Lady Milne. The team (photo below)

still being in a state over his previous were Sheila Adamson – Anne Symons, Liz McGowan – Sam Punch, Fiona

error, when he decided upon 2t he pulled McQuaker – Yvonne Wiseman;

out his t2 playing card and put it on the NPC: Brian Short.

before looking down at the table and 4. England 69 VPs

realising what he had done. 5. Northern Ireland 65 VPs

The Director was soon at the table and 6. WBU 38 VPs

couldn’t help but smile. ‘I thought I had England was represented by

seen everything but yet again John has Gillian Fawcett – Jane Moore,

or dummy, it is restored to John’s hand at