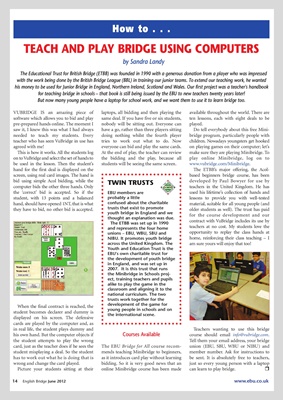 with the work being done by the British Bridge League (BBL) in training our junior teams. To extend our teaching work, he wanted

his money to be used for Junior Bridge in England, Northern Ireland, Scotland and Wales. Our first project was a teacher's handbook

for teaching bridge in schools – that book is still being issued by the EBU to new teachers twenty years later!

But now many young people have a laptop for school work, and we want them to use it to learn bridge too.

VUBRIDGE IS an amazing piece of laptops, all bidding and then playing the available throughout the world. There are

software which allows you to bid and play same deal. If you have five or six students, ten lessons, each with eight deals to be

pre-prepared hands online. The moment I nobody will be sitting out. Everyone can played.

saw it, I knew this was what I had always have a go, rather than three players sitting Do tell everybody about this free Mini-

needed to teach my students. Every doing nothing whilst the fourth player bridge program, particularly people with

teacher who has seen VuBridge in use has tries to work out what to do. Now children. Nowadays youngsters get hooked

agreed with me! everyone can bid and play the same cards. on playing games on their computer; let’s

This is how it works. All the students log At the end of play, the teacher can review make sure they are playing Minibridge. To

on to VuBridge and select the set of hands to the bidding and the play, because all play online Minibridge, log on to

be used in the lesson. Then the student’s students will be seeing the same screen. www.vubridge.com/Minibridge.

hand for the first deal is displayed on the The ETBB’s major offering, the Acol-

screen, using real card images. The hand is based beginners bridge course, has been

bid using simple Acol bidding, while the developed by Paul Bowyer for use by

computer bids the other three hands. Only

TWIN TRUSTS teachers in the United Kingdom. He has

the ‘correct’ bid is accepted. So if the EBU members are used his lifetime’s collection of hands and

student, with 13 points and a balanced probably a little lessons to provide you with well-tested

hand, should have opened 1NT, that is what confused about the charitable material, suitable for all young people (and

they have to bid, no other bid is accepted. trusts that exist to promote older students as well). The trust has paid

youth bridge in England and we

for the course devel opment and our

thought an explanation was due.

contract with VuBridge includes its use by

and represents the four home teachers at no cost. My students love the

unions – EBU, WBU, SBU and opportunity to replay the class hands at

across the United Kingdom. The am sure yours will enjoy that too!

Youth and Education Trust is the

EBU’s own charitable trust for

the development of youth bridge

in England, and was set up in

the Minibridge in Schools proj-

alike to play the game in the

classroom and aligning it to the

trusts work together for the

When the final contract is reached, the development of the game for

young people in schools and on

student becomes declarer and dummy is

displayed on his screen. The defensive

cards are played by the computer and, as

in real life, the student plays dummy and Teachers wanting to use this bridge

his own hand. But the computer objects if Courses Available course should email info@vubridge.com.

the student attempts to play the wrong Tell them your email address, your bridge

card, just as the teacher does if he sees the The EBU Bridge for All course recom - union (EBU, SBU, WBU or NIBU) and

student misplaying a deal. So the student mends teaching Minibridge to beginners, member number. Ask for instructions to

has to work out what he is doing that is as it introduces card play without learning be sent. It is absolutely free to teachers,

wrong and change the card played. bidding. So it is very good news that an just so every young person with a laptop

Picture your students sitting at their online Minibridge course has been made can learn to play bridge. r