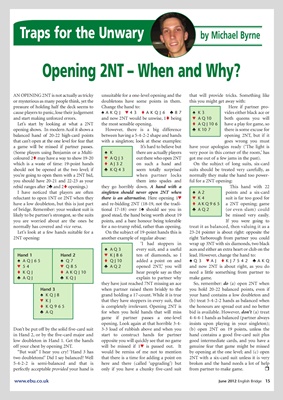 Opening 2NT – When and Why?

AN OPENING 2NT is not actually as tricky unsuitable for a one-level opening and the that will provide tricks. Something like

or mysterious as many people think, yet the doubletons have some points in them. this you might get away with:

pressure of holding half the deck seems to Change the hand to: Here if partner pro-

cause players to panic, lose their judgement ´AKQJ ™43 tAKQJ6 ®87 ´ K3 vides either black ace or

and start making unforced errors. and now 2NT would be unwise, 1t being ™ A Q 10 both queens you will

Let’s start by looking at what a 2NT the most sensible opening. t A Q J 10 6 have a play for game, so

opening shows. In modern Acol it shows a However, there is a big difference ® K 10 7 there is some excuse for

that can’t open at the one level for fear that with a singleton; look at these examples: goes wrong you must

a game will be missed if partner passes. It’s hard to believe but have your apologies ready (‘The light is

(Some players using Benjamin or a Multi- ´ K there are actually players very poor in this corner of the room,’ has

which is a waste of time: 19-point hands t AJ32 on such a hand and On the subject of long suits, six-card

should not be opened at the two level; if ® KQ43 seem totally surprised suits should be treated very carefully, as

you’re going to open them with a 2NT bid, when partner locks normally they make the hand too power-

rebid ranges after 2® and 2t openings.) they go horribly down. A hand with a This hand with 22

reluctant to open 1NT or 2NT when they there is an alternative. Here opening 1™ ™ K4 suit is far too good for

likely to be partner’s strongest, so the suits good stead, the hand being worth about 19 be missed very easily.

you are worried about are the ones he points, and a bare honour being tolerable If you were going to

normally has covered and vice versa. for a no-trump rebid, rather than opening. treat it as balanced, then valuing it as a

Let’s look at a few hands suitable for a On the subject of 19-point hands this is 23-24 pointer is about right: opposite the

2NT opening: another example of regular abuse: right Yarborough from partner you could

‘I had stoppers in wrap up 3NT with six diamonds, two black

´ AQ3 every suit, and a useful aces and either an extra heart or club on the

they have just reached 7NT missing an ace So, remember: do (a) open 2NT when

Hand 3 when partner raised them briskly to the you hold 20-22 balanced points, even if

´ KQJ8 grand holding a 17-count. While it is true your hand contains a low doubleton and

t KQ965 is completely irrelevant. Opening 2NT is the honours are spread out and no better

® AQ for when you hold hands that will miss bid is available. However, don’t (a) treat

opening. Look again at that horrible 3-4- insists upon playing in your singleton);

Don’t be put off by the solid five-card suit 3-3 load of rubbish above and when you (b) open 2NT on 19 points, unless the

in Hand 2, or by the five-card major and start to construct hands for partner hand contains a good five-card suit plus

low doubleton in Hand 1. Get the hands opposite you will quickly see that no game good intermediate cards, and you have a

off your chest by opening 2NT. will be missed if 1™ is passed out. It genuine fear that game might be missed

“But wait” I hear you cry! ‘Hand 3 has would be remiss of me not to mention by opening at the one level; and (c) open

two doubletons!’ Did I say balanced? Well that there is a time for adding a point on 2NT with a six-card suit unless it is very

perfectly acceptable provided your hand is only if you have a chunky five-card suit from partner to make game. r