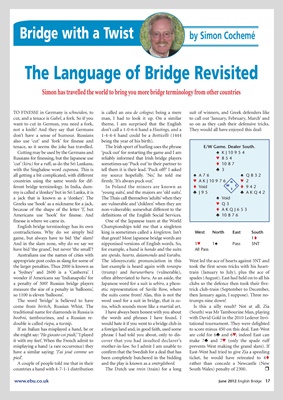 The Language of Bridge Revisited

TO FINESSE in Germany is schneiden, to is called an eau de cologne; being a mere suit of winners, and Greek defenders like

cut, and a tenace is Gabel, a fork. So if you man, I had to look it up. On a similar to call out ‘January, February, March’ and

want to cut in German, you need a fork, theme, I am surprised that the English so on as they cash their defensive tricks.

not a knife! And they say that Germans don’t call a 1-0-6-6 hand a Hastings, and a They would all have enjoyed this deal:

also use ‘cut’ and ‘fork’ for finesse and being the year of his birth).

tenace, so it seems the joke has travelled. The Irish sport of hurling uses the phrase E/W Game. Dealer South.

Russians for finessing, but the Japanese use reliably informed that Irish bridge players ™ 854

with the Singhalese word cupanoa. This is tell them it is their lead. ‘Puck off?’ I asked ® 3

ferent bridge terminology. In India, dum- In Poland the minors are known as t Void W

a jack that is known as a ‘donkey’. The The Thais call themselves ‘adults’ when they ´ Void

Greeks use ‘hook’ as a nickname for a jack, are vulnerable and ‘children’ when they are ™ Q3

because of the shape of the letter ‘J’, but non-vulnerable; somewhat different to the t AKQJ653

Americans use ‘hook’ for finesse. And definitions of the English Social Services. ® 10 8 7 6

finesse is where we came in. One of the Japanese team at the World

game, but always have to bid ‘the’ slam? that great? Most Japanese bridge words are 1t

And in the slam zone, why do we say we nipponised versions of English words. So, 1™ 1´ Pass 3NT

have bid ‘the grand’, but never ‘the small’? for example, a hand is hando and the suits All Pass

Australians use the names of cities with are speido, hearto, daiamondo and kurabu.

the larger penalties. Thus 2000 is known as last example is heard again with toranpu took the first seven tricks with his heart-

wonder if Americans say ‘Indianapolis’ for often abbreviated to baru. As an aside, the spades (August). East had held on to all his

a penalty of 500? Russian bridge players Japanese word for a suit is sebiro, a phon- clubs so the defence then took their five-

measure the size of a penalty in ‘balloons’, etic representation of Savile Row, where trick club-train (September to December,

so 1100 is eleven ‘balloons’. the suits come from! Alas, this is not the then January again, I suppose). Three no-

The word ‘bridge’ is believed to have word used for a suit in bridge, that is su- trumps nine down!

come from biritch, Russian Whist. The tsu, which sounds more like a martial art. Is this a silly result? Not at all. Zia

traditional name for diamonds in Russia is I have always been honest with you about (South) was Mr Tambourine Man, playing

boobni, tambourines, and a Russian re- the words and phrases I have found. I with David Gold in the 2010 Lederer Invi-

double is called riepa, a turnip. would hate it if you went to a bridge club in tational tournament. They were delighted

If an Italian has misplayed a hand, he or a foreign land and, in good faith, used some to score minus 450 on this deal. East-West

she might say: ‘Ho giocato coi piedi,’ ‘I played phrase I had told you about, only to dis- are cold for 6® and 6™; indeed East can

it with my feet’. When the French admit to cover that you had insulted declarer’s make 7® and 7™ (only the spade ruff

misplaying a hand (a rare occurrence) they mother-in-law. So I admit I am unable to prevents West making the grand slam). If

have a similar saying: ‘J’ai joué comme un confirm that the Swedish for a deal that has East-West had tried to give Zia a speeding

pied’. been completely butchered in the bidding ticket, he would have retreated to 4t

A couple of people told me that in their and the play is known as a smörgåsbord. rather than concede a Newcastle (New