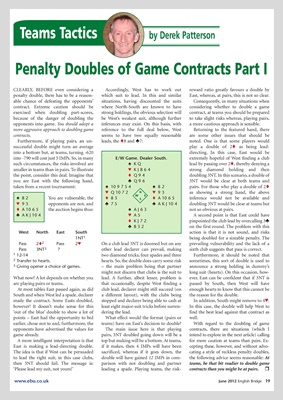 CLEARLY, BEFORE even considering a Accordingly, West has to work out reward ratio greatly favours a double by

penalty double, there has to be a reason- which suit to lead. In this and similar East, whereas, at pairs, this is not so clear.

able chance of defeating the opponents’ situations, having discounted the suits Consequently, in many situations when

contract. Extreme caution should be where North-South are known to have considering whether to double a game

exercised when doubling part-scores, strong holdings, the obvious selection will contract, at teams you should be prepared

because of the danger of doubling the be West’s weakest suit, although further to take slight risks whereas, playing pairs,

opponents into game. You should adopt a inferences may exist. On this basis, with a more cautious approach is sensible.

more aggressive approach to doubling game reference to the full deal below, West Returning to the featured hand, there

contracts. seems to have two equally reasonable are some other issues that should be

Furthermore, if playing pairs, an un- leads, the t8 and ®7: noted. One is that some players would

into a bottom but, at teams, turning -620 directing. In this case, East would be

into -790 will cost just 5 IMPs. So, in many E/W Game. Dealer South. extremely hopeful of West finding a club

such circumstances, the risks involved are ´ KQ lead by passing over 2t, thereby denying a

smaller in teams than in pairs. To illustrate ™ KJ864 strong diamond holding and then

the point, consider this deal. Imagine that t Q94 doubling 3NT. In this scenario, a double of

you are East with the following hand, ® Q96 3NT would be clear at both teams and

® 832 on the first round. The problem with this

West North East South action is that it is not sound, and risks

1NT1 being doubled for a sizeable penalty. The

1 12-14 two diamond tricks, four spades and three Furthermore, it should be noted that

2 Transfer to hearts. hearts. So, the double does carry some risk sometimes, this sort of double is used to

3 Giving opener a choice of games. – the main problem being that partner announce a strong holding in dummy’s

might not discern that clubs is the suit to long suit (hearts). On this occasion, how-

What now? A lot depends on whether you lead. A further, albeit lesser, problem is ever, East can be confident that if 3NT is

are playing pairs or teams. that occasionally, despite West finding a passed by South, then West will have

At most tables East passed again, as did club lead, declarer might still succeed (on enough hearts to know that this cannot be

South and when West led a spade, declarer a different layout), with the clubs being the reason for the double.

made the contract. Some Easts doubled, stopped and declarer being able to cash at In addition, South might remove to 4™.

however! It doesn’t make sense for this least eight major-suit tricks before surren- In this case, the double will help West to

‘out of the blue’ double to show a lot of dering the lead. find the best lead against that contract as

points – East had the opportunity to bid What effect would the format (pairs or well.

earlier, chose not to and, furthermore, the teams) have on East’s decision to double? With regard to the doubling of game

opponents have advertised the values for The main issue here is that playing contracts, there are situations (which I

game already. pairs, 3NT doubled going down will be a intend to explore in the next article) calling

A more intelligent interpretation is that top but making will be a bottom. At teams, for more caution at teams than pairs. Ex-

East is making a lead-directing double. if it makes, then 4 IMPs will have been cepting these, however, and without advo-

The idea is that if West can be persuaded sacrificed, whereas if it goes down, the cating a style of reckless penalty doubles,

to lead the right suit, in this case clubs, double will have gained 12 IMPs in com- the following advice seems reasonable: At

then 3NT should fail. The message is: parison with not doubling and partner teams, be that bit readier to double game

‘Please lead my suit, not yours!’ leading a spade. Playing teams, the risk- contracts than you might be at pairs. r