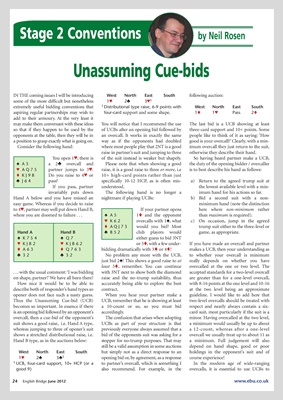 IN THE coming issues I will be introducing West North East South following auction:

add to their armoury. At the very least it

so that if they happen to be used by the of UCBs after an opening bid followed by three-card support and 10+ points. Some

opponents at the table, then they will be in an overcall. It works in exactly the same people like to think of it as saying: ‘How

a position to grasp exactly what is going on. way as if the opponents had doubled good is your overcall?’ Clearly, with a min-

Consider the following hand: where most people play that 2NT is a good imum overcall they just return to the suit,

raise in partner’s suit and jumping to three otherwise they describe their hand.

You open 1™, there is of the suit instead is weaker but shapely. So having heard partner make a UCB,

™ AQ75 partner jumps to 3™. raise, it is a good raise to three or more, i.e is to best describe his hand as follows:

If you pass, partner understood. the lowest available level with a min-

invariably puts down The following hand is no longer a imum hand for his actions so far.

Hand A below and you have missed an nightmare if playing UCBs: b) Bid a second suit with a non-

easy game. Whereas if you decide to raise minimum hand (note the distinction

to 4™, partner may well put down Hand B, If your partner opens here where non-minimum rather

where you are doomed to failure . . . ´ A5 1t and the opponent than maximum is required).

t AQJ73 would you bid? Most trump suit either to the three-level or

Hand A Hand B ® 852 club players would game, as appropriate.

t A63 t Q763 bidding dramatically with 3t or 4t! makes a UCB, then your understanding as

® 32 ® 32 No problem any more with the UCB, to whether your overcall is minimum

just bid 2´! This shows a good raise to at really depends on whether you have

least 3t, remember. You can continue overcalled at the one or two level. The

. . . with the usual comment: ‘I was bidding with 3NT next to show both the diamond accepted standards for a two-level overcall

on shape, partner!’ We have all been there! raise and the no-trump suitability, thus are greater than for a one-level overcall,

describe both of responder’s hand types so contract. at the two level being an approximate

opener does not face such a nasty guess. When you hear your partner make a guideline. I would like to add here that

Thus the Unassuming Cue-bid (UCB) UCB, remember that he is showing at least two-level overcalls should be treated with

becomes so important. In essence if there a 10-count or so, so you must bid respect and nearly always contain a six-

is an opening bid followed by an opponent’s accordingly. card suit, most particularly if the suit is a

overcall, then a cue-bid of the opponent’s The confusion that arises when adopting minor. Having overcalled at the two level,

suit shows a good raise, i.e. Hand A type, UCBs as part of your structure is that a minimum would usually be up to about

whereas jumping to three of opener’s suit previously everyone always assumed that a a 12-count, whereas after a one-level

shows a stretched distributional raise, i.e. bid of the opponents suit was asking for a overcall we usually treat up to about 11 as

Hand B type, as in the auctions below: stopper for no-trump purposes. That may a minimum. Full judgement will also

still be a valid assumption in some auctions depend on hand shape, good or poor

1 UCB, four-card support, 10+ HCP (or a to partner’s overcall, which is something I In the modern age of wide-ranging

good 9) also recommend. For example, in the overcalls, it is essential to use UCBs to