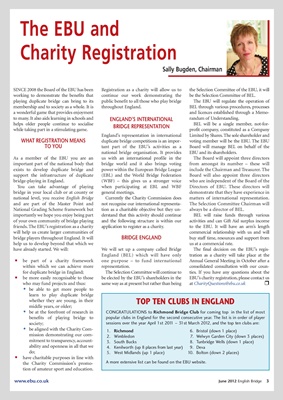 SINCE 2008 the Board of the EBU has been Registration as a charity will allow us to the Selection Committee of the EBU, it will

working to demonstrate the benefits that continue our work demonstrating the be the Selection Committee of BEL.

membership and to society as a whole. It is throughout England. BEL through various procedures, processes

to many. It also aids learning in schools and ENGLAND’S INTERNATIONAL randum of Understanding.

helps older people continue to socialise BEL will be a single member, not-for-

while taking part in a stimulating game. profit company, constituted as a Company

England’s representation in international Limited by Shares. The sole shareholder and

WHAT REGISTRATION MEANS duplicate bridge competitions is an impor- voting member will be the EBU. The EBU

national bridge organisation. It provides EBU and its shareholders.

exists to develop duplicate bridge and power within the European Bridge League include the Chairman and Treasurer. The

bridge-playing in England. (WBF) – this gives us a stronger voice who are independent of the Board of the

You can take advantage of playing when participating at EBL and WBF Directors of EBU. These directors will

bridge in your local club or at county or general meetings. demonstrate that they have experience in

National Grading Scheme framework but tion as a charitable objective but they un- always be a director of BEL.

friends. The EBU’s registration as a charity application to register as a charity. to the EBU. It will have an arm’s length

bridge players throughout England. It will BRIDGE ENGLAND buy staff time, resources and support from

help us to develop beyond that which we us at a commercial rate.

have already started. We will: We will set up a company called Bridge The final decision on the EBU’s regis-

• be part of a charity framework

within which we can achieve more

one purpose – to fund international

Annual General Meeting in October after a

consolidated consultation with our coun-

for duplicate bridge in England; The Selection Committee will continue to ties. If you have any questions about the

• be more easily recognisable to those

who may fund projects and thus:

be elected by the EBU’s shareholders in the

same way as at present but rather than being

• be able to get more people to

whether they are young, in their

benefits of playing bridge to popular clubs in England for the second consecutive year. The list is in order of player

ability and openness in all that we 4. Kenilworth (up 8 places from last year) 9. Deva

• have charitable purposes in line with

tion of amateur sport and education.