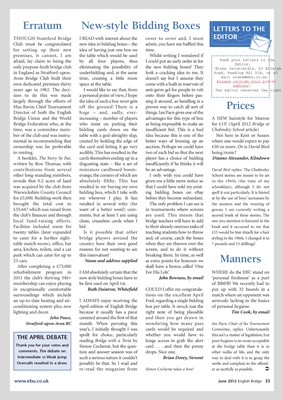 THOUGH Stamford Bridge I READ with interest about the cover to cover and, I must EDITOR

Club must be congratulated new idea in bidding boxes – the admit, you have me baffled this

for setting up their new idea of having just one box on time.

premises, it cannot, I am the table which would be used Whilst writing I wondered if

afraid, lay claim to being the by all four players, thus I could put an early order in for Send your letters to the

only purpose-built bridge club eliminating the possibility of the new bidding boxes? They Elena Jeronimidis, 23 Erleigh

in England as Stratford-upon- underbidding and, at the same look a cracking idea to me. It Road, Reading RG1 5LR, or e?

own dedicated premises thirty space at the table. come with a built in reservoir of address)

years ago in 1982. The deci- I would like to say that, from anti-germ gel for people to rub The editor reserves the right

sion to do this was made a personal point of view, I hope onto their fingers before pas-

largely through the efforts of the idea of such a box never gets sing it around, as handling is a

Director of both the English

off the ground! There is a

proven way to catch all sort of

things. Ian Payn gives one of the

Bridge Federation who, at the who insist on putting their as being impossible to make an for £15! (April 2012 Bridge at

time, was a committee mem- bidding cards down on the insufficient bid. This is a bad Cholmeley School article)

ber of the club and was instru- table with a god-almighty slap, idea because this is one of the Not here in Kent or Sussex

ownership was far preferable the card and letting it go very auction. Perhaps we could have £50 or more. Or is David Bird

to renting. audibly. This has resulted in the two of each bid so that the next being ironic?

A booklet, The Story So Far, cards themselves ending up in a player has a choice of bidding Dianne Alexander, Kilndown

written by Ron Thomas, with disgusting state – like a set of insufficiently if he thinks it will

other long-standing members, erangs, the corners of which are I only wish you could have School stories are meant to be set

reveals that 0.2 acres of land absolutely filthy. This has given me a little more notice so in the 1960s (the time of my

was acquired by the club from resulted in my buying my own that I could have sold my exist- schooldays), although I do not

Warwickshire County Council bidding box, which I take with ing bidding boxes on eBay spell it out particularly. It is hinted

for £5,000. Building work then me wherever I play. It has before they become redundant. at by the use of boys’ surnames by

£55,647 which was raised from want of a better word) com- in tournaments where screens gowns. I am currently writing a

the club’s finances and through ments, but at least I am using are used. This means that second book of these stories. The

local fund-raising efforts. clean, creaseless cards when I bridge teachers will have to add one you mention is featured in the

Facilities included room for bid. to their already onerous tasks of book and it occurred to me that

to cater for a further eight- bridge players around the and, of course, catch the boxes styling in the 1960s. I changed it to

table match-room), office, bar country have their own good when they are thrown over the 7 pounds and 15 shillings!

area, kitchen, toilets, and a car reasons for not wanting to see screen, and to do it without

park which can cater for up to this innovation? breaking them. In time, as well

25 cars. Name and address supplied as extra points for honours we Manners

After completing a £75,000 shall have a bonus called ‘One

refurbishment program in I AM absolutely certain that the For His Lob.’ WHERE do the EBU stand on

2011 the club’s thriving 340+ new style bidding boxes have to John Bowness, by email ‘personal freshness’ as a part

membership can enjoy playing be first used on April 1st. of BB@B? We recently had to

in exceptionally comfortable Ruth Daintree, Whitefield COULD I offer my congratula- put up with 32 boards in a

an up-to-date heating and air- I ALWAYS enjoy receiving the Fool, regarding a single bidding seriously lacking in the basics

conditioning system plus new April edition of English Bridge box per table. It struck just the of personal hygiene.

lighting and decor. because it usually has a piece right note of being plausible Tim Cook, by email

John Peace, centered around the first of that and then you get drawn in

Stratford-upon-Avon BC month. When perusing this won dering how many pass Ian Payn, Chair of the Tournament

year’s, I initially thought I was cards would be required and Committee, replies: Unfortunately

spoilt for choice, particularly whether you would have to this isn't a matter of legislation, but

Thank you for your votes and Simon Cochemé, but the ques- card . . . and then the penny at the bridge table than it is in

comments. The debate on tion and answer session was of drops. Nice one. other walks of life, and the only

Intermediate vs Weak Jump such a serious nature it couldn’t Brian Dorey, Newent way to deal with it is to grasp the

Overcalls resulted in a draw. possibly be that. So I read and nettle and complain to the offend-

re-read the magazine from Simon Cochemé takes a bow! er as tactfully as possible. ‹