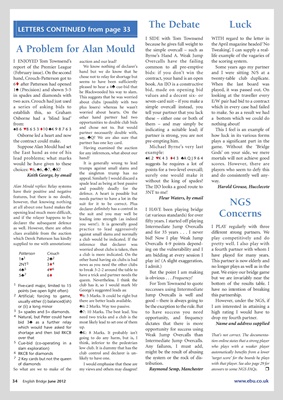 I SIDE with Tom Townsend WITH regard to the letter in

because he gives full weight to the April magazine headed ‘No

A Problem for Alan Mould the simple overcall – such as

Tweaking’, I can supply a real-

life example of the vagaries of

I ENJOYED Tom Townsend’s auction and our lead? Overcalls have the failing the scoring system.

(February issue). On the second hand but we do know that he bids: if you don’t win the and I were sitting N/S at a

hand, Crouch-Patterson got to chose not to relay for shortage but contract, your hand is an open twenty-table club duplicate.

seems to have been sufficiently

6t after Patterson had opened book. An IJO is a constructive When the last board was

pleased to hear a 4® cue-bid that

1´ (Precision) and shown 5-5 he Blackwooded his way to slam. bid, made on opening bid played, it was passed out. On

two aces. Crouch had just used about clubs (possibly with two seven-card suit – if you make a E/W pair had bid to a contract

a series of asking bids to plus losers) whereas he wasn’t simple overcall instead, you which in every case had failed

establish this, so Graham worried about hearts. On the tell your partner that you lack to make. So as a result we had

from: opportunities to double club bids them – and may simply be nothing about!

indicating a suitable lead; if This I feel is an example of

Osborne led a heart and now say, ®Q? We are also sure that

partner is strong, you are not how luck in its various forms

the contract could make. partner has one key card. pre-empting him. plays a significant part in the

the East hand as one of his for any inferences, what about our ex am ple: Gods’ on your side, we mere

would he have given to these It is generally wrong to lead suggests he requires a lot of scores. However, there are

choices: ™6, ´6, ®7, ®K? trumps against small slams and points for a two-level overcall; players who seem to defy this

Keith George, by email the singleton trump has no surely one would make it and do consistently well any-

appeal. Similarly I would discard a

spade lead as being at best passive

without the king of spades? way.

and possibly deadly for the

have their positive and negative defence. A heart is possible but 3NT to me!

features, but there is no doubt, needs partner to have a lot in the Fleur Waters, by email

however, that knowing nothing

at all about one hand makes the

suit for it to be correct. Plus

declarer definitely has a control in

I HAVE been playing bridge

and if the relayer happens to be

the suit and you may well be

leading into strength (as indeed

(at various standards) for over Concerns

declarer the subsequent defence fifty years. I started off playing

you were!). It is generally good

as well. However, there are often Intermediate Jump Overcalls I PLAY regularly with three

clues available from the auction against small slams and normally and for 35 years . . . I never different strong partners. We

which Derek Patterson has kindly a club would be indicated. If the bid! Now I play Weak Jump play competitively and do

supplied to me with annotations: inference that declarer was Overcalls 4-9 points depend- pretty well. I also play with

worried about clubs is taken, then ing on the vulnerability and I a fourth partner with whom I

Patterson Crouch a club is more indicated. On the am bidding at every session I have played for many years.

1´1 2®2 other hand having six clubs is bad play in! (A slight exaggeration, This partner is now elderly and

2NT3 3t4 news as you need the other clubs I admit.) no longer plays as well as in the

But the point I am making past. We enjoy our bridge game

5®7 6t have a trick and partner needs the

queen. Nevertheless. I think the is obvious . . . Frequency! but we are invariably near the

1 Five-card major, limited to 15 club has it, so I would mark Mr For Tom Townsend to quote bottom of the results table. I

2 Artificial; forcing to game, ™6: 5 Marks. It could be right but Jump Overcalls is well and this partnership.

usually either (i) balanced(ish) there are better leads available. good – there is always going to However, under the NGS, if

or (ii) a long minor ´6: 2 Marks. Way too passive. be the exception to the rule. But I am interested in attaining a

4 Natural, but Peter could have need two tricks and a club is the opportunity, and frequency drop my fourth partner.

which would have asked for up. opportunity for success using

shortage and then bid RKCB ®K: 8 Marks. It probably isn’t

Weak Jump Overcalls than That’s not correct. The documenta-

over that going to do any harm, but is, I

5 think, inferior to the pedestrian

Cue-bid (co-operating in a

slam exploration) low club. It is dummy that has the Any failures, I must add, who plays with a weaker player

7 2 Key cards but not the queen likely to have one. the system or the rock of dis- ‘target score’ for the boards he plays

of diamonds I would emphasise that these are tribution. with that player. See also page 29 for

So what are we to make of the my views and others may disagree! Raymond Semp, Manchester answers to some NGS FAQs. r