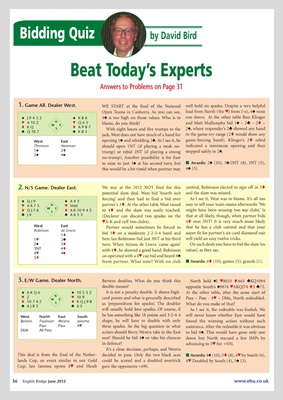 1. Game All. Dealer West. WE START at the final of the National well hold six spades. Despite a very helpful

S With eight losers and five trumps to the

jack, West does not have much of a hand for in the game-try range (2t would show any

West East opening 1´ and rebidding 2´. As I see it, he game-forcing hand). Klinger’s 2t rebid

no-trump). Another possibility is for East

2. N/S Game. Dealer East. We stay at the 2012 NOT final for this control, Robinson elected to sign off in 5t

forcing’ and then had to find a bid over As I see it, West was to blame. It’s all too

™ AK75 N ™ Void partner’s 3t. At the other table West raised easy to tell your team-mates afterwards: ‘We

® J4 ® A653 (Declarer can discard two spades on the that at all likely, though, when partner bids

2´ 3t turn. When Arjuna de Livera ‘came again’ On such deals you have to bid the slam ‘on

as ‘preparedness for spades’. The doubler What do you make of that?

will usually hold four spades. Of course, if As I see it, the redouble was foolish. We

Bertens Paulissen Westra Jansma shape, he will have to double with only found the winning action without such

Pass Pass 4™ three spades. So the big question is: what assistance. After the redouble it was obvious

action should Berry Westra take in the East to bid 4´. This would have gone only one

seat? Should he bid 4´ or take his chances down but North rescued a few IMPs by