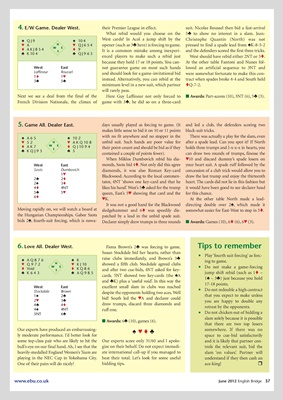 What rebid would you choose on the 5® to show no interest in a slam. Jean-

t 9 It is a common mistake among inexperi- and the defenders scored the first three tricks.

enced players to make such a rebid just West should have rebid either 2NT or 3t.

because they hold 17 or 18 points. You can- At the other table Fantoni and Nunes fol-

3® 5® instead. Alternatively, you can rebid at the tract when spades broke 4-4 and South held

minimum level in a new suit, which partner tQ-7-2.

French Division Nationale, the climax of game with 3®, he did so on a three-card

5. Game All. Dealer East. days usually played as forcing to game. (It and led a club, the defenders scoring two

makes little sense to bid it on 10 or 11 points black-suit tricks.

´ A65 ´ 10 2 with no fit anywhere and no stopper in the There was actually a play for the slam, even

S their point-count and should be bid as if they holds three trumps and J-x-x-x in hearts, you

contained a couple of points fewer). can draw two rounds of trumps, finesse the

West East monds, Szots bid 4t. Not only did this agree your heart suit. A spade ruff followed by the

Szots Dumbovich diamonds, it was also Roman Key-card concession of a club trick would allow you to

Blackwood. According to the local commen- draw the last trump and enjoy the thirteenth

2´ 3t tator, 4NT ‘shows one key-card and that he heart. The cards did not lie in this fashion but

4t 4NT likes his hand’. West’s 5® asked for the trump it would have been good to see declarer head

™K. At the other table North made a lead-

It was not a good hand for the Blackwood directing double over 2´, which made it

Moving rapidly on, we will watch a board at sledgehammer and 6t was speedily dis- somewhat easier for East-West to stop in 5t.

the Hungarian Championships. Gabor Szots patched by a lead in the unbid spade suit.

6. Love All. Dealer West. Fiona Brown’s 2® was forcing to game. Tips to remember

Susan Stockdale bid her hearts, rather than

t KQ86 and after two cue-bids, 4NT asked for key- • Do not make a game-forcing

Stockdale Brown despite the opponents holding two aces. Well • Do not redouble a high contract

bid! South led the ™A and declarer could

you are happy to double any

retreat by the opponents.

slam solely because it is possible

that there are two top losers

Our experts have produced an embarrassing- somewhere. If there was no

bull’s-eye on our final hand. Ah, I see that the gize on their behalf. Do not expect immedi- trols the relevant suit, bid the

heavily-medalled England Women’s Team are ate international call-up if you managed to slam ‘on values’. Partner will

playing in the NEC Cup in Yokohama City. beat their total. Let’s look for some useful understand if they then cash an

One of their pairs will do nicely! bidding tips. ace-king! r