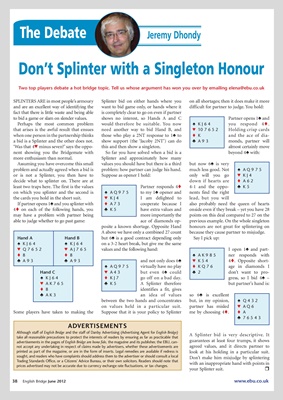 Don’t Splinter with a Singleton Honour

SPLINTERS ARE in most people’s armoury Splinter bid on either hands where you on all shortages; then it does make it more

and are an excellent way of identifying the want to bid game only, or hands where it difficult for partner to judge. You hold:

to bid a game or slam on slender values. shows no interest, so Hands A and C Partner opens 1´ and

Perhaps the most common problem would therefore be suitable. You now ´ KJ64 you respond 4t .

that arises is the awful result that ensues need another way to bid Hand B, and ™ 10 7 6 5 2 Holding crisp cards

a bid is a Splinter and the other does not. show support (the ‘Jacoby 2NT’) can do ® A93 monds, partner will

‘Was that 4™ minus seven?’ says the oppo- this and then show a singleton. almost certainly move

nent showing you the Bridgemate with So far you have solved when a bid is a beyond 4´ with:

more enthusiasm than normal. Splinter and approximately how many

problem and actually agreed when a bid is problem: how partner can judge his hand. much less good. Not ´ AQ975

or is not a Splinter, you then have to Suppose as opener I hold: only will you go ™ KJ4

decide what to splinter on. There are at down if hearts are t A62

least two traps here. The first is the values Partner responds 4t 4-1 and the oppo- ® K5

the cards you hold in the short suit. ™ KJ4 I am delighted to lead, but you will

4t on each of the following hands, you ® K5 have extra values and onside even if they break – yet you have 28

able to judge whether to go past game: ace of diamonds op- previous example. On the whole singleton

posite a known shortage. Opposite Hand honours are not great for splintering on

A above we have only a combined 27 count because they cause partner to misjudge.

Hand A Hand B but 6´ is a good contract depending only Say I pick up:

between the two hands and concentrates but, in my opinion, ´ Q432

on values held in a particular suit. partner has misled ™ AQ6

Some players have taken to making the Suppose that it is your policy to Splinter me by choosing 4t. t A

A Splinter bid is very descriptive. It

advertisements in the pages of English Bridge are bona fide, the magazine and its publisher, the EBU, can- guarantees at least four trumps, it shows

not accept any undertaking in respect of claims made by advertisers, whether these advertisements are agreed values, and it directs partner to

printed as part of the magazine, or are in the form of inserts. Legal remedies are available if redress is look at his holding in a particular suit.

sought, and readers who have complaints should address them to the advertiser or should consult a local Don’t make him misjudge by splintering

Trading Standards Office, or a Citizens’ Advice Bureau, or their own solicitors. Readers should note that

with an inappropriate hand with points in