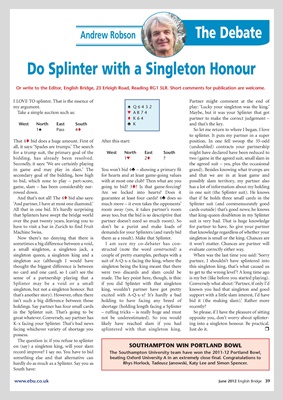 Do Splinter with a Singleton Honour

Take a simple auction such as: ™ A874 Maybe, but it was your Splinter that got

to splinter. It puts my partner in a super

That 4t bid does a huge amount. First of After this start: position. In one fell swoop the 35-odd

all, it says: ‘Spades are trumps.’ The search (undoubled) contracts your partnership

for a trump suit, the primary goal of the West North East South might have declared have been reduced to

bidding, has already been resolved. 1™ 2t ? two (game in the agreed suit, small slam in

Secondly, it says: ‘We are certainly playing the agreed suit – yes, plus the occasional

in game and may play in slam.’ The You won’t bid 4® – showing a primary fit grand). Besides knowing what trumps are

secondary goal of the bidding, how high for hearts and at least game-going values and that we are in at least game and

to bid, which zone to play – part-score, with at most one club? Then what are you possibly slam territory, my partner also

game, slam – has been considerably nar- going to bid? 3t? Is that game-forcing? has a lot of information about my holding

rowed down. Are we locked into hearts? Does it in one suit (the Splinter suit). He knows

And that’s not all! The 4t bid also says: guarantee at least four cards? 4® does so that if he holds three small cards in the

‘And partner, I have at most one diamond.’ much more – it even takes the opponents’ Splinter suit (and commensurately good

All that in one bid. It’s hardly surprising room away (yes, it takes partner’s room cards outside) that’s good news; he knows

that Splinters have swept the bridge world away too, but the bid is so descriptive that that king-queen doubleton in my Splinter

over the past twenty years, leaving you to partner doesn’t need so much room). So suit is very bad. That is huge knowledge

have to visit a bar in Zurich to find Fruit don’t be a purist and make loads of for partner to have. So give your partner

Machine Swiss. demands for your Splinters (and rarely bid that knowledge regardless of whether your

Now there’s no denying that there is them as a result). Make that Splinter. singleton is small or the king. Chances are

sometimes a big difference between a void, I am sure my co-debater has con - it won’t matter. Chances are partner will

a small singleton, a singleton jack, a structed (note the word constructed) a evaluate correctly either way.

singleton queen, a singleton king and a couple of pretty examples, perhaps with a When was the last time you said: ‘Sorry

singleton ace (although I would have suit of A-Q-x-x facing the king, where the partner, I shouldn’t have splintered into

thought the biggest difference is between singleton being the king meant that there this singleton king, that’s what caused us

no card and one card, so I can’t see the were two discards and slam could be to get to the wrong level’? A long time ago

sense of a partnership playing that a made. The key point here, though, is this: is my bet (like before you started playing).

Splinter may be a void or a small if you did Splinter with that singleton Conversely what about: ‘Partner, if only I’d

singleton, but not a singleton honour. But king, wouldn’t partner have got pretty known you had that singleton and good

that’s another story). However, often there excited with A-Q-x-x? It’s hardly a bad support with a little slam interest, I’d have

isn’t such a big difference between those holding to have facing any breed of bid it (the making slam).’ Rather more

in the Splinter suit. That’s going to be – ruffing tricks – is really huge and must So please, if I have the pleasure of sitting

great whatever. Conversely, say partner has not be underestimated). So you would opposite you, don’t worry about splinter-

K-x facing your Splinter. That’s bad news likely have reached slam if you had ing into a singleton honour. Be practical.

facing whichever variety of shortage you splintered with that singleton king. Just do it. r

The question is: if you refuse to splinter

on (say) a singleton king, will your slam SOUTHAMPTON WIN PORTLAND BOWL

record improve? I say no. You have to bid The Southampton University team have won the 2011-12 Portland Bowl,

something else and that alternative can beating Oxford University A in an extremely close final. Congratulations to

hardly do as much as a Splinter. Say you as Rhys Horlock, Tadeusz Janowski, Katy Lee and Simon Spencer.