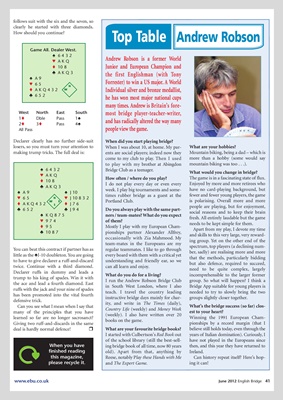 follows suit with the six and the seven, so

clearly he started with three diamonds.

How should you continue?

t 10 8 Junior and European Champion and

the first Englishman (with Tony

Forrester) to win a US major. A World

he has won most major national cups

many times. Andrew is Britain’s fore -

and has radically altered the way many

All Pass people view the game.

Declarer clearly has no further side-suit When did you start playing bridge?

losers, so you must turn your attention to When I was about 10, at home. My par- What are your hobbies?

making trump tricks. The full deal is: ents are social players; indeed now they Mountain biking, being a dad – which is

come to my club to play. Then I used more than a hobby (some would say

to play with my brother at Abingdon mountain biking was too . . .).

´ 6432 Bridge Club as a teenager. What would you change in bridge?

How often / where do you play? The game is in a fascinating state of flux.

week. I play big tournaments and some- have no card-playing background, but

times rubber bridge as a guest at the fewer and fewer young players, the game

people are playing, but for enjoyment,

social reasons and to keep their brain

fresh. All entirely laudable but the game

needs to be kept simple for them.

t 95 Mostly I play with my European Cham-

Apart from my play, I devote my time

and skills to this very large, very reward-

occasionally with Zia Mahmood. My

ing group. Yet on the other end of the

team-mates in the Europeans are my

You can beat this contract if partner has as regular teammates. I like to go through

little as the ´J-10 doubleton. You are going every board with them with a critical yet

that the methods, particularly bidding

to have to give declarer a ruff-and-discard understanding and friendly ear, so we

but also defence, required to succeed,

twice. Continue with a third diamond. can all learn and enjoy.

need to be quite complex, largely

Declarer ruffs in dummy and leads a

What do you do for a living? incomprehensible to the larger former

trump to his king of spades. Win it with

I run the Andrew Robson Bridge Club group. So what will happen? I think a

the ace and lead a fourth diamond. East

in South West London, where I also Bridge App suitable for young players is

ruffs with the jack and your nine of spades

teach. I travel the country leading needed to try to slowly bring the two

has been promoted into the vital fourth

ity, and write in The Times (daily),

many of the principles that you have est to your heart?

(weekly). I also have written over 20

learned so far are no longer sacrosanct? Winning the 1991 European Cham-

books on the game.

deal is hardly normal defence! r What are your favourite bridge books? believe still holds today, even through the

I started with Culbertson's Red Book out years of Italian domination). Curiously, I

When you have ing bridge book of all time, now 80 years then, and this year they have returned to

finished reading old). Apart from that, anything by Ireland.

this magazine, Reese, notably Play these Hands with Me Can history repeat itself? Here’s hop-

please recycle it. and The Expert Game. ing it can!