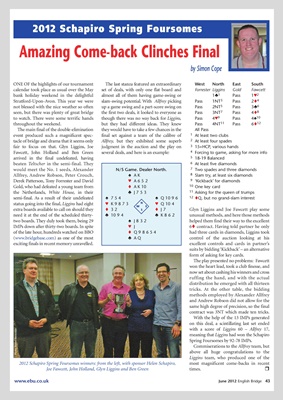 calendar took place as usual over the May set of deals, with only one flat board and Forrester Liggins Gold Fawcett

seen, but there was plenty of great bridge the first two deals, it looked to everyone as Pass 3NT 7 Pass 4t8

to watch. There were some terrific hands though there was no way back for Liggins, Pass 4™ 9 Pass 4´10

throughout the weekend. but they had different ideas. They knew Pass 4NT 11 Pass 6t12

tacle of bridge and drama that it seems only Allfrey, but they exhibited some superb 2 At least four spades

fair to focus on that. Glyn Liggins, Joe judgment in the auction and the play on 3 15+HCP, various hands

Fawcett, John Holland and Ben Green several deals, and here is an example: 4 Forcing to game, asking for more info

arrived in the final undefeated, having 5 18-19 Balanced

beaten Teltscher in the semi-final. They 6 At least five diamonds

Derek Patterson, Tony Forrester and David ™ A652 9 ‘Kickback’ for diamonds

the Netherlands, White House, in their ® J753 11 Asking for the queen of trumps

status going into the final, Liggins had eight ™ K9873 W

two boards. They duly took them, being 29 ´ J832 helped them find their way to the excellent

IMPs down after thirty-two boards. In spite ™ J 6t contract. Having told partner he only

(www.bridgebase.com) as one of the most ® AQ control of the auction looking at his

suits by bidding ‘Kickback’ – an alternative

form of asking for key cards.

The play presented no problems: Fawcett

won the heart lead, took a club finesse, and

now set about cashing his winners and cross

ruffing the hand, and with the actual

distribution he emerged with all thirteen

tricks. At the other table, the bidding

and Andrew Robson did not allow for the

same high degree of precision, so the final

contract was 3NT which made ten tricks.

With the help of the 13 IMPs generated

on this deal, a scintillating last set ended

meaning that Liggins had won the Schapiro

Commiserations to the Allfrey team, but

above all huge congratulations to the

Liggins team, who produced one of the

2012 Schapiro Spring Foursomes winners: from the left, with sponsor Helen Schapiro, most magnificent come-backs in recent