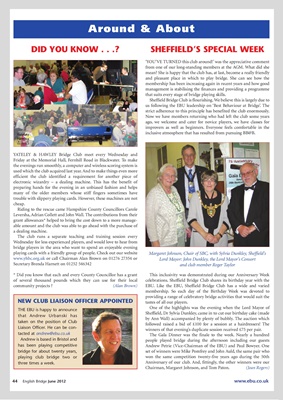 DID YOU KNOW . . .? SHEFFIELD’S SPECIAL WEEK

‘YOU’VE TURNED this club around!’ was the appreciative comment

from one of our long-standing members at the AGM. What did she

mean? She is happy that the club has, at last, become a really friendly

and pleasant place in which to play bridge. She can see how the

membership has been increasing again in recent years and how good

management is stabilising the finances and providing a programme

that suits every stage of bridge playing skills.

Sheffield Bridge Club is flourishing. We believe this is largely due to

us following the EBU leadership on ‘Best Behaviour at Bridge’. The

strict adherence to this principle has benefited the club enormously.

ago, we welcome and cater for novice players, we have classes for

improvers as well as beginners. Everyone feels comfortable in the

inclusive atmosphere that has resulted from pursuing BB@B.

Friday at the Memorial Hall, Fernhill Road in Blackwater. To make

the evenings run smoothly, a computer and wireless scoring system is

used which the club acquired last year. And to make things even more

efficient the club identified a requirement for another piece of

electronic wizardry – a dealing machine. This has the benefit of

preparing hands for the evening in an unbiased fashion and helps

many of the older members whose stiff fingers sometimes have

trouble with slippery playing cards. However, these machines are not

Leversha, Adrian Collett and John Wall. The contributions from their

The club runs a separate teaching and training session every

Wednesday for less experienced players, and would love to hear from

playing cards with a friendly group of people. Check out our website Margaret Johnson, Chair of SBC, with Sylvia Dunkley, Sheffield’s

of several thousand pounds which they can use for their local celebrations. Sheffield Bridge Club shares its birthday year with the

community projects ? (Alan Brown) EBU. Like the EBU, Sheffield Bridge Club has a wide and varied

membership. So each day of the Birthday Week was devoted to

providing a range of celebratory bridge activities that would suit the

NEW CLUB LIAISON OFFICER APPOINTED tastes of all our players.

THE EBU is happy to announce

Sheffield, Dr Sylvia Dunkley, came in to cut our birthday cake (made

that Andrew Urbanski has

by Ann Wall) accompanied by plenty of bubbly. The auction which

taken on the position of Club

followed raised a bid of £100 for a session at a hairdressers! The

Liaison Officer. He can be con- winners of that evening’s duplicate session received £75 per pair.

tacted at andrew@ebu.co.uk The Gala Dinner was the finale to the week. Nearly a hundred

has been playing competitive Andrew Petrie (Vice-Chairman of the EBU) and Paul Bowyer. One

bridge for about twenty years, set of winners were Mike Pomfrey and John Auld, the same pair who

three times a week. Anniversary of our club. And, fittingly, the other winners were our