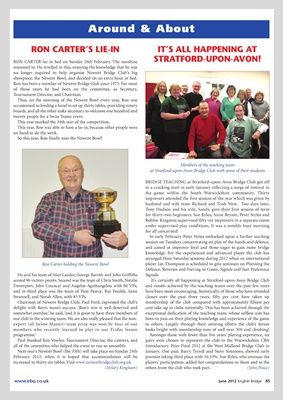 streamed in. He revelled in this, enjoying the knowledge that he was

showpiece, the Newent Bowl, and decided on an extra hour in bed.

Ron has been a member of Newent Bridge Club since 1975. For most

of those years he had been on the committee, as Secretary,

Thus, on the morning of the Newent Bowl every year, Ron was

accustomed to lending a hand to set up thirty tables, providing ninety

boards, and all the other tasks necessary to welcome one hundred and

This year marked the 34th year of the competition.

This year, Ron was able to have a lie-in, because other people were

on hand to do the work.

So this year, Ron finally won the Newent Bowl!

Members of the teaching team

at Stratford-upon-Avon Bridge Club with some of their students

BRIDGE TEACHING at Stratford-upon-Avon Bridge Club got off

the game within the South Warwickshire community. Thirty

Tony Hudson and his wife, Sandy, gave their first session of term

under supervised play conditions. It was a notably busy morning

In early February Peter Styles embarked upon a further teaching

session on Tuesdays concentrating on play of the hands and defence,

knowledge. For the experienced and advanced player the club has

Defence, Reverses and Forcing to Game, Signals and Suit Preference

He and his team of Alan Lander, George Barratt and John Griffiths Signals.

Davenport, John Councer and Angelos Agathangelou with 90 VPs, and results achieved by the teaching teams over the past few years

and in third place was the team of Pam Pearce, Ray Foulds, Anne have been most encouraging. Statistically, of those who have attended

Swannell, and Norah Allen, with 83 VPs. classes over the past three years, fifty per cent have taken up

Chairman of Newent Bridge Club, Paul Ford, expressed the club’s membership of the club compared with approximately fifteen per

delight with Ron’s team’s success. ‘Ron’s win is well-deserved and cent take-up in clubs nationally. This has been achieved through the

somewhat overdue,’ he said, ‘and it is great to have three members of exceptional dedication of the teaching team, whose selfless aim has

our club in the winning team. We are also really pleased that the non- been to pass on their playing knowledge and experience of the game

expert (all below Master) team prize was won by four of our to others. Largely through their untiring efforts the club’s future

members who recently learned to play in our Friday lesson looks bright with membership now of well over 300 and climbing!

programme.’ Amongst those with fewer than five years’ playing experience, six

Paul thanked Ken Vowles, Tournament Director, the caterers, and pairs were chosen to represent the club in the Warwickshire CBA

all of the committee who helped the event to run so smoothly. Introductory Pairs Final 2012 at the West Midland Bridge Club in

February 2013, when it is hoped that accommodation will be promise taking third place with 56.33%. Sue Ryles, who oversaw the

increased to thirty-six tables. Visit www.newentbridgeclub.org.uk players’ participation, added her congratulations to them and to the

(Hylary Kingham) others from the club who took part. (John Peace)