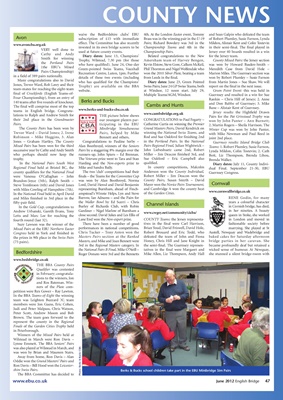 waive the Bedfordshire clubs’ EBU 4th. At the London Easter event, Tommy and Sean Galpin who defeated the team

Avon subscription of £15 with immediate Brass was in the winning pair in the U-19 of Robert Plumley, Susie Farnon, Lynda

www.avoncba.org.uk effect. The Committee has also recently Pairs; Richard Bowdery was 3rd in the Mildon, Alistair Kent and Colin Tostevin

invested in its own bridge scorers to be Championship Teams and 4th in the in their semi-final. The final played in

Cathy and Andy Diary dates: June 13, Champions’ Belated congratulations to the New for the Jersey team.

in a field of 389 pairs nationally. details of these two events (including from Leeds in the final. won by Robert Plumley – Susie Farnon

Many congratulations also to David who has qualified for the Champions’ Diary dates: June 23, Green Pointed from Martin Jones – Sue Shaw. We will

Jones, Trevor Ward, Rob Lawy and their Trophy) are available on the BBA Swiss Pairs; June 24 GP Swiss Teams, both report on the final in the next issue.

team-mates for reaching the eight-team website. at Windsor, 12 noon start. July 29, Green Point Event: this was held in

final of Crockfords (English Teams-of- Multiple Teams/AGM, Windsor. Guernsey and resulted in a win for Sue

Four Championship), from an entry of Rankin – Chris Hill of Jersey; 2. Anne

140 teams after five rounds of knockout. Berks and Bucks and Don Babbe of Guernsey; 3. Mike

The final will comprise most of the top Cambs and Hunts Bane – Alistair Kent of Guernsey.

their 2nd place in the Grandmaster our youngest players par- CONGRATULATIONS to Paul Fegarty – won by John Panter – Ann Burnett;

Pairs. ticipating in the EBU Catherine Curtis on winning the Premier 2. Martin Rogers – Sheila Harrison. The

The County Pairs has been won by Minibridge Simultaneous Grand Masters Pairs, David Kendrick on Winter Cup was won by John Panter,

county qualifiers for the National Final The two ‘club’ competitions had their Anderson won the County Individual, Guernsey Congress.

with Miles Cowling of Hampshire (7th). representing Burnham, ahead of Finch- and Cambridge A won the county heat

of the Garden Cities. www.cornwallbridge.co.uk

and Miles finished in 3rd place in the Barrow, Ian Adnams – and the Pairs for RENE Godin, for many

Burley of Richards Club, with Robin Channel Islands in Cornish bridge, has died,

In the Gold Cup, congratulations to

Andrew Urbanski, Gareth Evans, Tony Gardiner – Nigel Marlow of Burnham a in her nineties. A beauty

Letts and Marc Lee for reaching the close second. David Jukes and Les Ellis of queen in Stoke, she worked

fourth round (last 32). Lane End won the Non-expert prize. COUNTY Teams: the Jersey representa- in London and moved in

Suzy Lawson was the winner of the There have been a number of good tives in the final were Carl Harrison, fashionable society before

Congress held in York and finished in Chris Tucker – Tony Aston won the Robert Brouard and Eric Todd, who Austell, Newquay and Wadebridge and

(75 pairs). Masters, and Mike and Joan Bennett were Honey, Chris Hill and Jane Knight in bridge parties in her caravan. She

3rd in the Regional Masters category. In the semi-final. The Guernsey represen- became profoundly deaf but retained a

the National Pairs B Final, Mike O’Neill – tatives in the final were Margaret and wicked sense of humour. At Newquay,

Bedfordshire Roger Donato were 3rd and the Bennetts Mike Allen, Liz Thompson, Andy Hall she stunned a silent bridge-room with

tions to the winners, Jon

ners of the Plate com-

In the BBA Teams-of-Eight the winning

team was Leighton Buzzard ‘A’; team

Brown. The team goes forward to the

represent the county in the Regional

Winners of the Mixed Pairs held at

Wilstead in March were Ron Davis –

was also played at Wilstead in March, and

was won by Brian and Maureen Stairs.

Away from home, Ron Davis – Alan

The BBA Committee has decided to